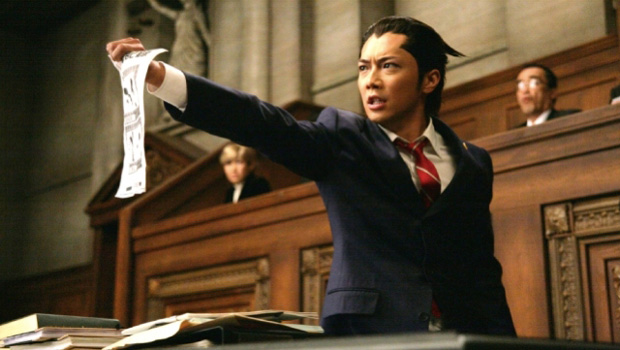 Remember the news from earlier this year that wacky-tobacky Japanese film director Takashi Miike was going to give the Ace Attorney series the live-action film treatment? A couple days ago, Capcom Europe posted the first still from the film shoot; just yesterday, teaser footage that aired on Japanese television was uploaded to YouTube.

As you can see above, the film is looking deliciously campy and fun. Phoenix and Edgeworth engage in a heated “OBJECTION!” (“IGIARI!”) screaming match, Phoenix scrambles to produce evidence that he’s not even sure is in his possession, and Minority Report-like holographic displays appear in the air at the snap of a finger — err, well, the games do technically take place in the future. We even catch a few glimpses that confirm the Manfred von Karma chapter from the original game will be incorporated in the story.

The end result may possibly be a crock of sh*t, but Phoenix’s crazy, slicked-back, cockatiel hairstyle is giving me a glimmer of hope. The film will drop in early 2012; perhaps some magic will happen and the eventual DVD release will receive a Western localization.