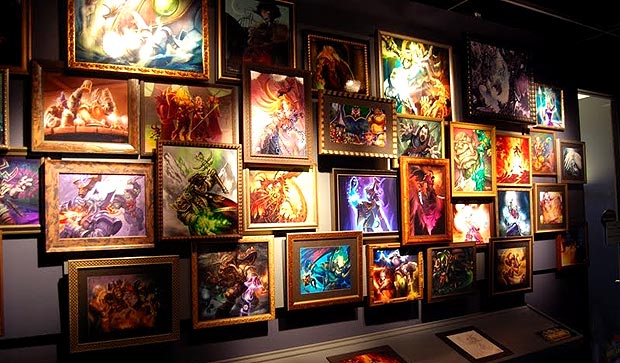 Even though Jonathan visited Blizzard HQ twice over the summer and brought back a few photos, Blizzard has always been a rather secretive company. In an industry full of leaks and rumors, Blizzard keeps most of its info and inner-workings under wraps, managing Azeroth from afar from what is surely a tower made of fetal bones and teeth. Even the name of the company evokes something remote, barren, and off-limits.

Well, Entertainment Web has blown their cover: they’ve collected over a hundred photos that reveal that not only is Blizzard staffed by humans (as opposed to warlocks and doom-virgins, like I thought), but that their offices are swanky as hell.

I have to admit that my office at work isn’t that bad: I’ve got a nice new computer to work on, a huge desk, plenty of shelf space, and more candied almonds than I’ll ever eat. What I don’t have is a beach volleyball court, a library full of science fiction and video games, or giant statues of orcs riding on coyotes. Blizzard’s offices have all of those things, and it’s no surprise that Starcraft II isn’t out yet—wouldn’t you rather play in your company’s arcade than, y’know, work?