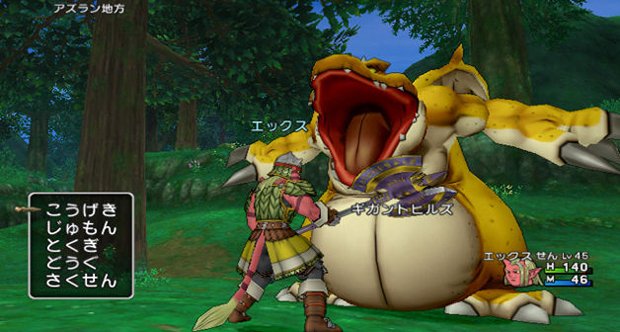 Writing that headline made me want to create a game called Beasts and Classes: Beat some Asses!, where you play as a human-type teacher who has to discipline-spank different Pokemon-like students, the ones who didn’t do their homework or talked too much in class or whatever.

Anyway, here’s the latest report on Dragon Quest X, the game that may simultaneously be the Wii’s last big-name release and the Wii U’s first must-have title. Here in the gallery, we have a look at six of the game’s job classes — Warrior, Martial Artist, Mage, Thief, Monk, and Minstrel. What job you choose and which of the five tribes your character belongs to determines your look. You can play against type all you want, so if you’d like a cute little green warrior or a muscle-bound, red-skinned, lute-loving Minstrel, that’s your call. As always, Akira Toriyama’s designs are spot on. Dragon Quest and Dragon Ball fans aren’t likely to be disappointed.

We also get a look at three of the game’s new monsters, including “Thieving Bunny” and “Smiling Lizard.” Smiling Lizard won’t be smiling once I’m done that ass!