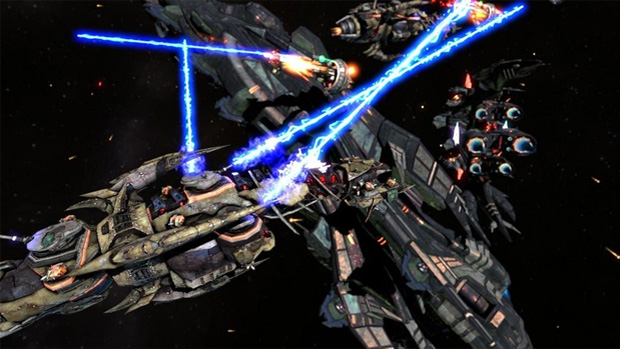 In an interview with Gamespot, Kerberos CEO and lead designer Martin Cirulis went in-depth about the changes in the upcoming Sword of the Stars II: Lords of Winter. Set 100 years later at a time of galactic empires, the sequel to the pretty well-received 4X game and its expansions features a new race that is a hybrid faction with access to both Lords and Zuul technology.

Ships no longer have a “simple hit points,” but instead will have a separate “2D armor matrix” and an internal structure. Different weapons will do different types of damage to both the protective armor — to remove protection — and the internal systems that generate critical hits when struck.

You can combine weapons to maximize their effectiveness by, for instance, focusing one type of weapon on a small section of the armor matrix to pierce the protective layer, and then following it up with a weapon that destroys internal systems through the hole you just punctured. But that’s not all.

New Leviathan-class ships will function as a fleet’s command cruiser in a space that is fully 3D this time around, with all the different altitude strategies that come with multi-plane space combat. Also, the political system in SotSII will be an emergent system based on the economic, military, and diplomatic decisions you make, rather than just selecting a government for its bonuses.

The tech tree will remain randomized like in the first Sword of the Stars, but this time you’ll be able to see more of the tree at once. Yet seeing a technology down the path of a certain tech-tree doesn’t mean you’ll actually be able to unlock it. Scientists may warn you that they don’t see it happening that researching a tech will lead to its successful acquisition, although you can just tell them to shut up and pump R&D funds into the project anyway and hope that the scientists were simply unnecessarily pessimistic. Going with their recommendations, however, will likely yield better end results.

Kind of similar to the minor races in Galactic Civilizations II, minor races will now pop up as independent colonies you can dominate or peacefully incorporate into your empire through diplomacy. These minor races will have the same core attributes in every game you play, but they will also have a few random features to make every encounter with them a fresh experience.

Multiplayer will keep the drop-in system that functioned in SotS, but Kerberos is also working on better communication options to connect with your friends and the ability to share info between games, as well as improving the stand-alone free SotS server.

Finally, Cirulis points out that they don’t consider Sword of the Stars II to be just a simple sequel, but a “logical and thematic evolution of a game set in a galaxy that has advanced 100 years since the first game.”

I hope all of these aspirations won’t turn it into a game that will be as inaccessible as Master of Orion 3, but fans of the original Sword of the Stars should be in for a treat when the sequel hits on September 2nd, 2011.

And if you didn’t understand a word of what you just read, that’s perfectly ok.