I was supposed to Dungeon Master a session of Dungeons & Dragons tonight, but that post-E3 fatigue comes in hard. So why not tell you about my hands-on session with n-Space’s Sword Coast Legends, a new asymmetrical co-op RPG based on the fifth edition of D&D? That’s right, soak in some of these geek juices. We’re about to get nerdy in here.

CRPGs have had a resurgence as of late: Pillars of Eternity, Divinity: Original Sin, and Wasteland 2 have been giving old-school PC gamers something to smile about. And while I’m an awful dirty bag of trashwater because I haven’t had time to try those out extensively, I can tell that they don’t scratch the itch that a pen and paper RPG can. If a few kinks are worked out, Sword Coast Legends might be able to do just that. 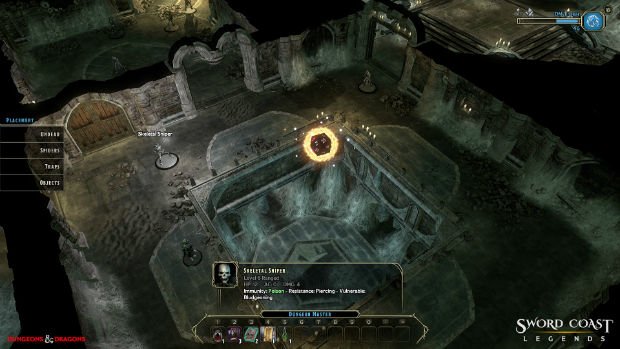 Four other journalists and I jumped into Wizards of the Coast’s last appointment on the final day of E3, and we quickly established that we had much more than a passing familiarity with tabletop gaming. The small room had a computer for each of us, with one additional unit available for senior producer Tim Schwalk to take on the role of DM. Each monitor was flanked by d20s and pre-painted minifigs, and I immediately felt at home. I chose to play as Jarhild Stoneforge, a female dwarf fighter.

Schwalk had probably done this demo 492 times at this point, but instead of seeming tired and frustrated, he saw an opportunity to make our adventure particularly bizarre. He showed us how ridiculously intuitive the creation system is before we actually started playing. He first chose an empty, pre-generated town. Since he wanted us to do a quest, he chose to create a questgiver with just a couple of clicks. Though we were skipping through in the interest of time, he showed us that you could customize their backstory, race, clothing, and appearance. Then he went through a menu, deciding how the quest would be triggered.

Next, we got to see an abandoned mountain cabin. Schwalk realized it wasn’t as atmospheric as he wanted, so he dragged a time slider as we watched the shadows cascade in quick whorl, chasing a disappearing sun. A few more keys were pressed and a lightning storm began raging. Zooming into the cabin, he quickly placed loot and furniture around the room, finishing up by leaving a corpse with an impossible amount of bloodstains around him. It was by this point that I was becoming seriously impressed by how easy DMing looked. Sure, Schwalk was familiar with the system by now, but despite the large number of drop-down menus, sliders, and toggles, the process was easy to follow. 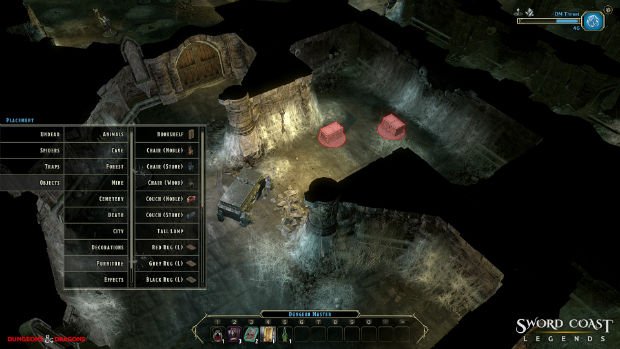 After he had established the ease of creation, he dropped us into a dungeon and we began our short adventure. We were to fight cultists, demons, and ultimately a Spider Queen (no, it wasn’t Lolth!). Schwalk placed all sorts of weird stuff throughout the catacombs, like circus tents filled with spider eggs, unarmed villagers who would sprint up to our merry band of adventurers to punch us, and a bunch of traps. The combat is based on fifth edition, so abilities are easy to understand and numbers are relatively small. This goes a long way in making Sword Coast Legends seem less intimidating for new players.

Following behind our scouting rogue, we slowly cleaved our way through various creatures. Occasionally, a glowing ball of light would silently float by. We were told that it was a representation of the DM, letting us know he was nearby, perhaps plotting something nefarious. On the fly, he was placing new enemies, sometimes letting their AI handle themselves, other times inhabiting them directly. He also decided to give the boss just about every spell in the game just for laughs.

It was heartening to see that he had limitless power; there was no resource bar or cooldown keeping him from doing whatever he had in mind. Beautifully, this represents a Dungeon Master’s power perfectly (that’s a sentence no one should say aloud). Does the DM have the power to be a relentless dick? Yup. Could he perhaps make it way too simple? Sure! But that’s exactly how it should be. D&D isn’t about the DM beating the players, it’s about him or her making the game as fun as possible for them at all times. The less barriers to that, the better. 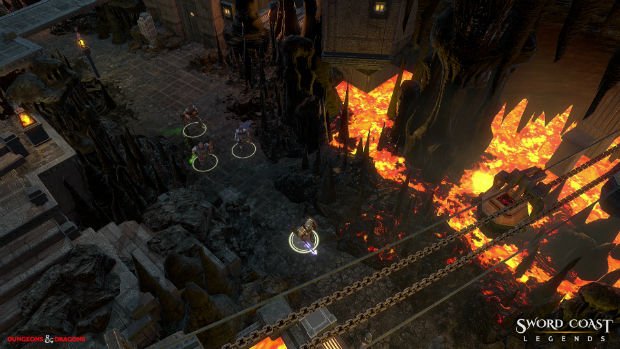 I glanced over at Schwalk’s screen (now played by another journalist, trying out the role), not to cheat, but to see how it worked in a bit more detail. He was placing little miniatures which would instantly become monsters when they were ready to fight. Once in a while he would choose to set ambush triggers on chests or doors, and could make his own group or choose a pre-set one. He could also set the difficulty of each mob, in case the dungeon crawl was too easy/hard.

We all knew our character classes well, but were still nearly destroyed by the boss we fought. The Spider was flanked by two Onis that kept summoning storm clouds over us, doing continuous damage and obscuring our vision. When we finally cleansed the room of evil, the demo ended and everyone was grinning. One journalist even walked over to the monitor on the wall and repeatedly swiped his credit card against it, loudly proclaiming “it’s not working! I need it! Let me take it home!” I felt largely the same, though I do have a couple of large concerns.

As of now, the combat is sluggish. My fighter seemed to be carving her way out of a giant flan each time she swung her sword, and there wasn’t much heft to connected strikes. There’s a slight delay between your click and the ability actually happening, and I hope skirmishes feel punchier upon release. Though role-playing isn’t just about the battles, and Sword Coast Legends lets you focus on the story by writing your own content and dialogue, there’s no getting around the fact that conquering a dungeon and/or dragon needs to feel satisfying. 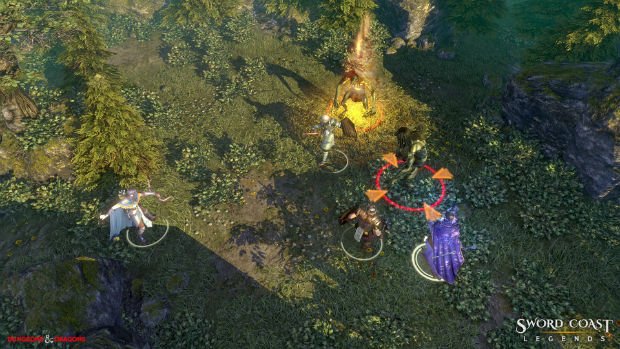 I’m also worried about how expensive Sword Coast Legends is going to be. Since you need a $39.99 copy for each of the five players to have a full group, there’s already a high barrier to entry. But the developers kept talking about tilesets, creatures, and abilities from the upcoming Rage of Demons module for the pen and paper game. I’m sure that’ll cost extra, but how much? Will all five players have to have it to be able to play together? Will there be packs for already-existing modules like Prince of the Apocalypse? While it’s great that n-Space plans on keeping their game relevant, my wallet already weeps.

If these turn out to be non-issues, I’m definitely going to replace a couple of my normal D&D sessions with this digital form. I am in love with the idea of Sword Coast Legends, and I hope n-Space can pull this off. Also, here’s Tim Schwalk’s headshot, included in the press assets, which is super hilarious to me: 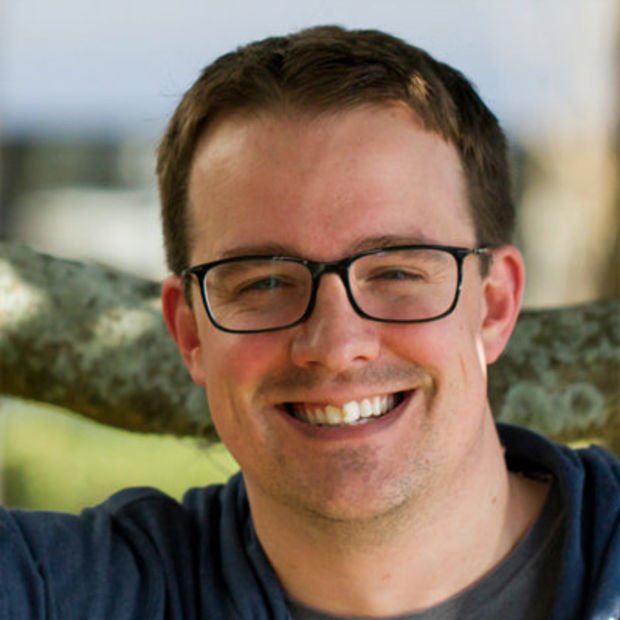