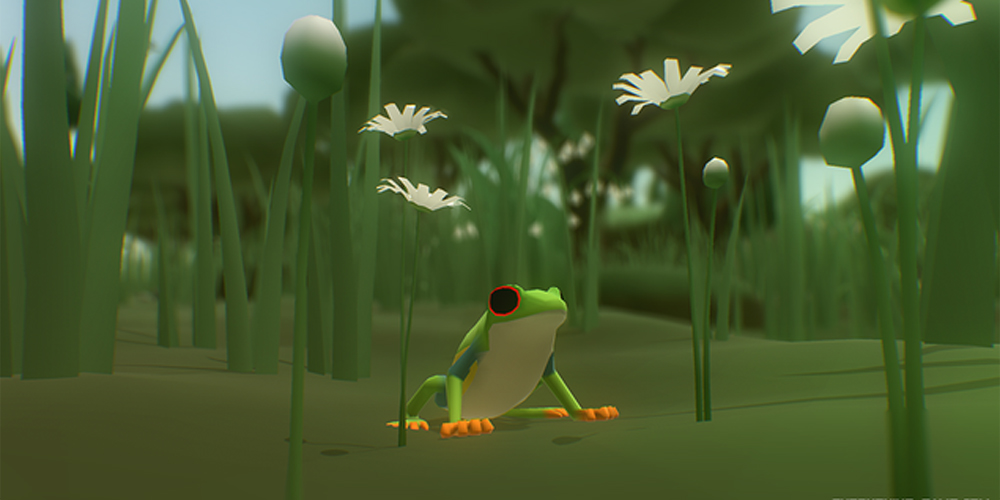 I just became a porta potty

With Super Mario Odyssey, Nintendo came close to maxing out on the concept of being anyone you want to be. While that made for a one-of-a-kind experience within the Mario universe, there were actually a few other games that used the same hook first. One example is Everything, a game from animator David O’Reilly (Her, Mountain, Adventure Time, Eat My Sharts).

The main difference is that Everything doesn’t set you out on a quest to rescue anyone, or to go anywhere in particular. Odyssey breaks down the barriers between player and non-player characters, but it never forgets that it’s ultimately a Super Mario game, meaning that in the end, it’s still about running, jumping, and saving Peach from Bowser. Everything isn’t constrained by those conventions. If you decide to be a rock, then you can just roll around and live like a rock if you want. Why would a rock care about saving a princess? Why would some discarded bird feathers want to do anything other than float around on the wind?

If it sounds like Everything is a game about nothing, then that means I’m halfway to describing it properly.

I started off my first round of Everything as a seal, who, like most seals, couldn’t do much more than waddle around and hope for the best. Soon after I gained the ability to sing, which allowed me to charm other living things, while helping me become more of myself. The more of “yourself” you become, the more likely you are to generate thoughts, which come out as tiny pieces of text. more often than not are designed to elicit a smile. Your thoughts are unique to whatever type of thing you are inhabiting at the time, so if you become a polar bear, you will think different thoughts than if you’re, let’s say, a camp fire.

You go around singing and and thinking for a while, then open up the ability to get other similar things to flock alongside you, and even dance with you. Dancing is the game’s means of reproduction, so if you want to add more to your flock, you can do it without actually “rolling up” someone new. You can just give birth to a new pal if you have a few moments to spare. 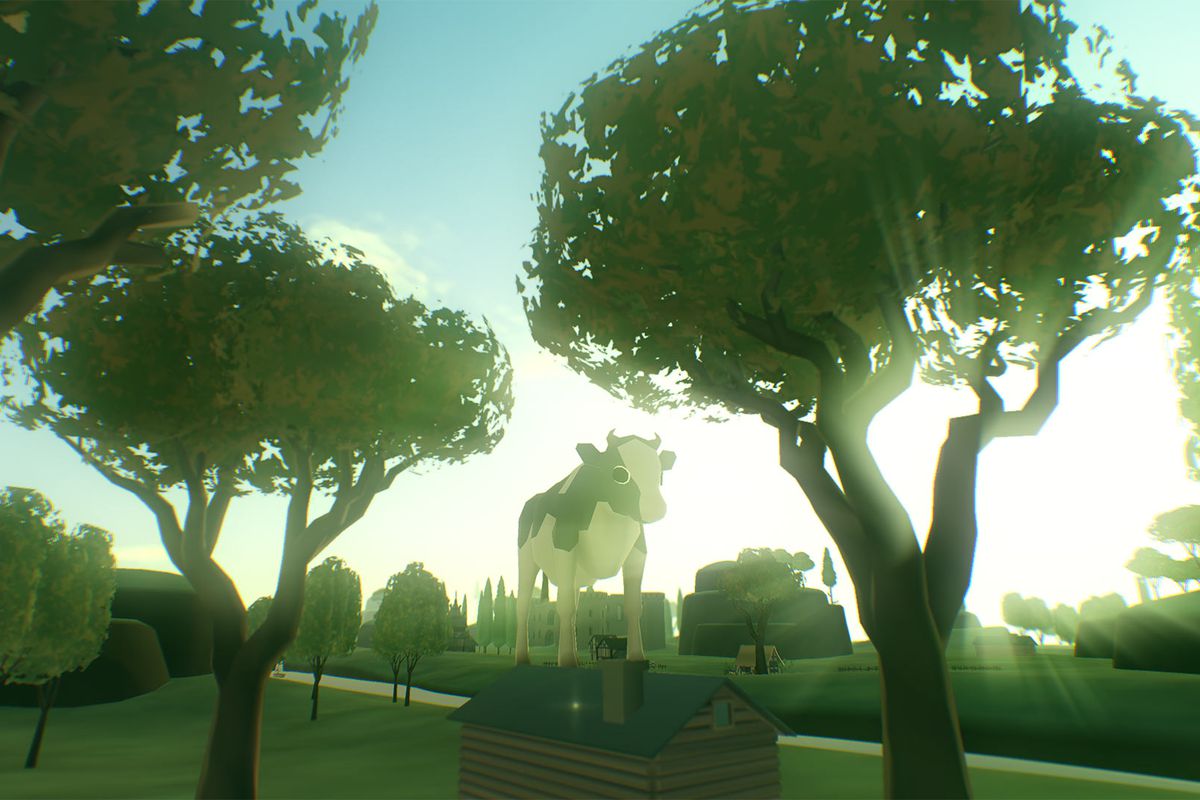 After that, you gain the ability to transfer your consciousness into anything that is smaller than you, which brings the game’s scale down to the level of puddles and pebbles. Spend a few minutes down there and you’ll learn to ascend upward, to the forms of woolly mammoths and spruce trees. Then, finally, you’ll gain the ability to transform into anything you’ve already taken the shape of, whenever you want. Your size will remain basically the same though, so if you change from a giant redwood to a pigeon, that’s going to be one big pigeon.

Eventually, you possess a golden, alien-looking sculpture and sink into it. There you will find a ghostly, miserable world where teapots and dried-up pieces of bacon float around listlessly, regretting all their missed opportunities. They wrap themselves in a thick coat of self-loathing as they drift forever with no problems to cope with, other than themselves. This new world feels like a bleak take on the afterlife, until you possess a miniature planet as it floats on by. 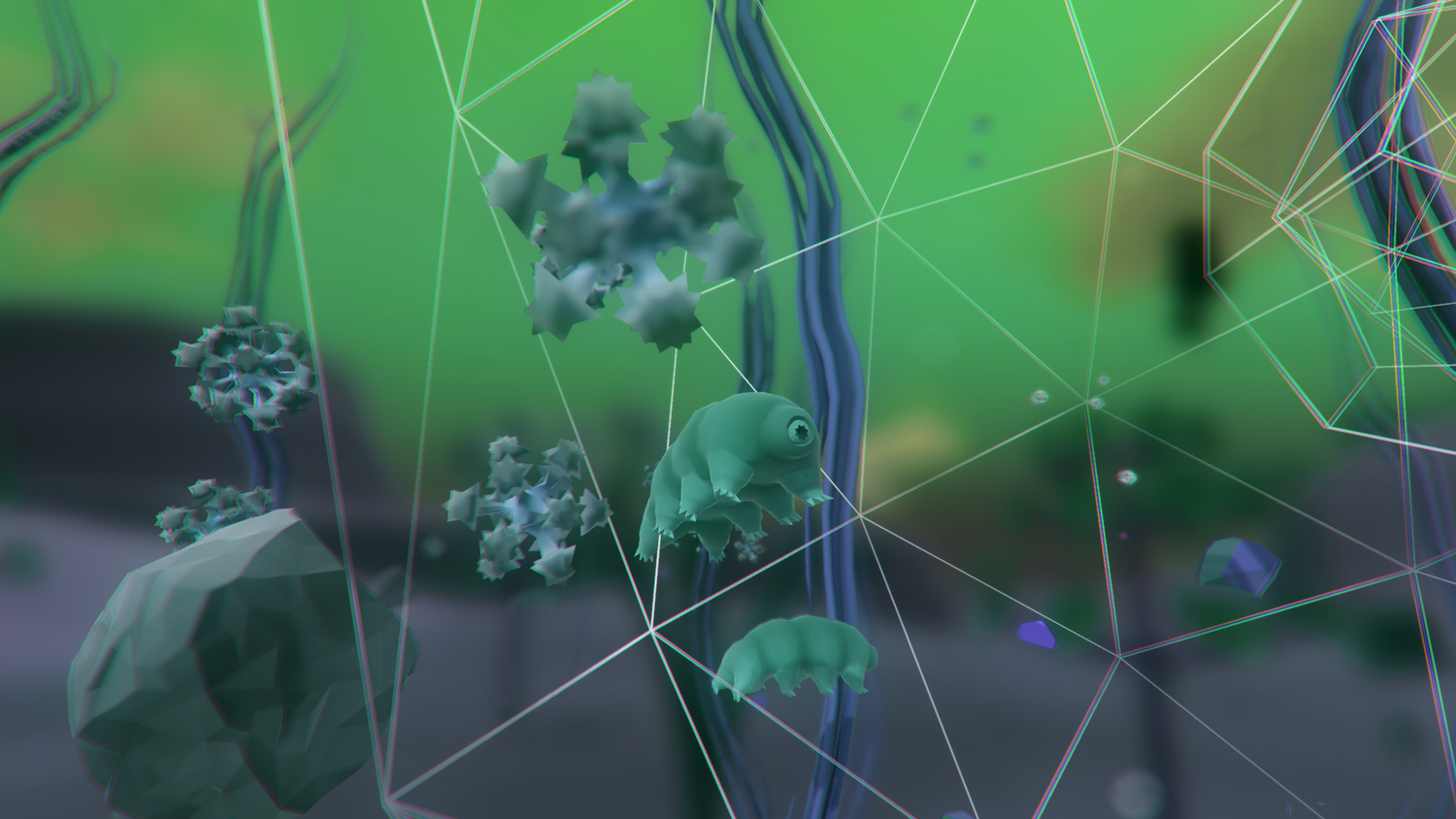 If you descend into that, you’ll discover a delightful little dimension where hamburgers, running shoes, and port-a-potties all run free. They are totally relaxed and having a good time, despite the fact that their problems – and the sad bacon’s problems – are more or less the same. I don’t want to spoil what happens next, but rest assured, it gets even more eye-opening from there.

All this action is interspersed with audio logs from scientist and metaphysical theologian Alan Watts. These talks drive home the underlying themes of the game while never aggressively spelling them out or coming across like propaganda. Listening to a man say that boundaries are illusions that can disappear as soon as we stop believing in them, while you play a game that lets you become a penguin at any time may sound random, but it makes perfect sense while you’re experiencing it. 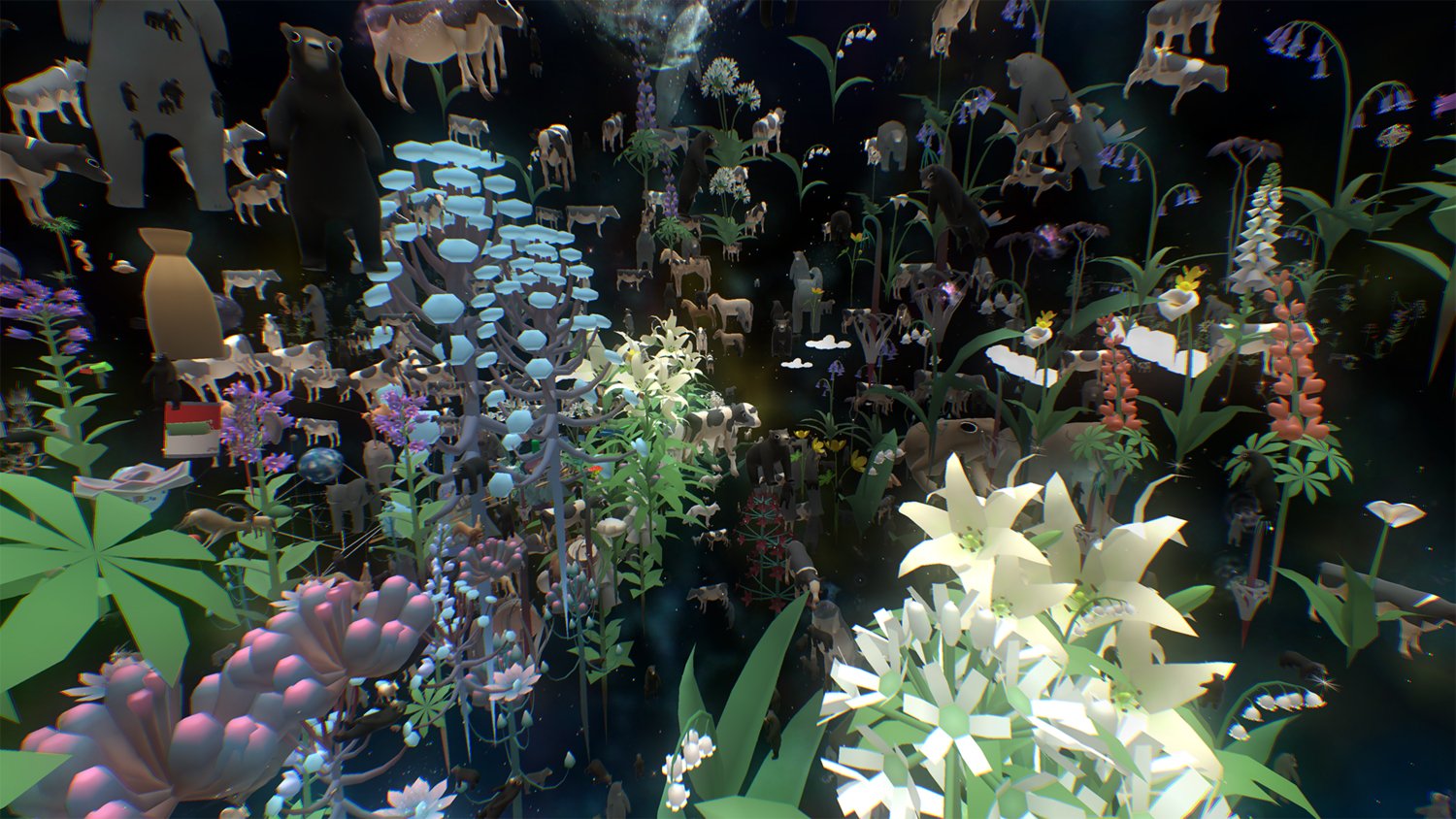 Everything isn’t shy about its spiritual intentions. It wants you to consider reincarnation, the afterlife, the Yin/Yang relationship between fullness and emptiness, and how an all powerful being is completely unable to do anything because “doing” requires some opposing force to push against. Everything also just wants you to have fun exploring a big pacifist playground, with a surprise around every turn.

Everything runs great on Switch, but don’t go into this adventure expecting a technical marvel. It’s a relatively low budget game that takes on a big scope. Most characters have no movable joints, giving the whole thing a “playing with hundreds of cheap toys” feel. That doesn’t detract from the experience though. Flower, Snowpack Park, Journey, Katamari Damacy, Chibi Robo, and Little Computer People got by just fine without realistic horse testicle physics, or realistic acne textures, and Everything holds up just fine without them too.