Roughly two and a half years ago, Onion Games and publisher DMM released an absolute gem of a game in Dandy Dungeon: The Legend of Brave Yamada. It combined roguelike elements with puzzle solving and ridiculous characters to make for an experience dramatically different than most other games clogging up the various app stores. I gave it a 9.5 and if you’d like to try it out for yourself right now, you can’t. Late last year, DMM shut the service down, though anyone who already had it could download an update that allowed them to play it on their device with microtransactions, a few dungeons, and a few other features removed.

Like many mobile games, this could have meant Dandy Dungeon would be lost to the ages, surviving only on those devices that could run it after the final update. Thankfully, like so many other titles, it’s finding new life on Switch with a port that retains the charm and zaniness of the original version without those pesky free-to-play elements.

Dandy Dungeon: The Legend of Brave Yamada tells the story of Yamada-kun, a 36-year-old game developer who’s just been let go from Empire Games for missing too much work. Yamada has been spending his time at home, in his underwear, building his own game. Inspired by his beautiful new neighbor Maria, a girl nearly 20-years his junior, he sets out to make a game with her as the damsel in distress and himself as the hero, hoping his exploits in the digital world will somehow translate to her loving him in the real world.

Yamada can’t make this game alone and this is where you come in. You play as an overseer, watching Yamada make his game and testing it out for him. Every time he implements a new idea he gets from one of the many crazy characters who visit him, you have to test it out to see how it plays. His game within this game is a rather simple path-drawing puzzle where you have to guide Yamada’s avatar through each five-square-by-five-square floor, stepping on each tile once to get a perfect clear. Each floor will also house various enemies and obstacles Yamada will have to defeat, which he does automatically though you can come to his aid with various spells and items.

The gameplay I loved so much on mobile remains unchanged on Switch, though Dandy Dungeon does make use of the hardware to provide players with a few enhancements. For starters, you no longer have to be online to play. Microtransactions have been removed and the user interface has been reworked to complement the original portrait mode aspect ratio with the increased real estate offered by the Switch. Leaderboards have been added to see how you score on certain dungeons ranks against players from around the world and the in-game shops now accept in-game currency. This means the splendiferous Momazon.mom theme song is still here, though most of her wares don’t really do much of anything other than add some visual panache to an already swell-looking game. 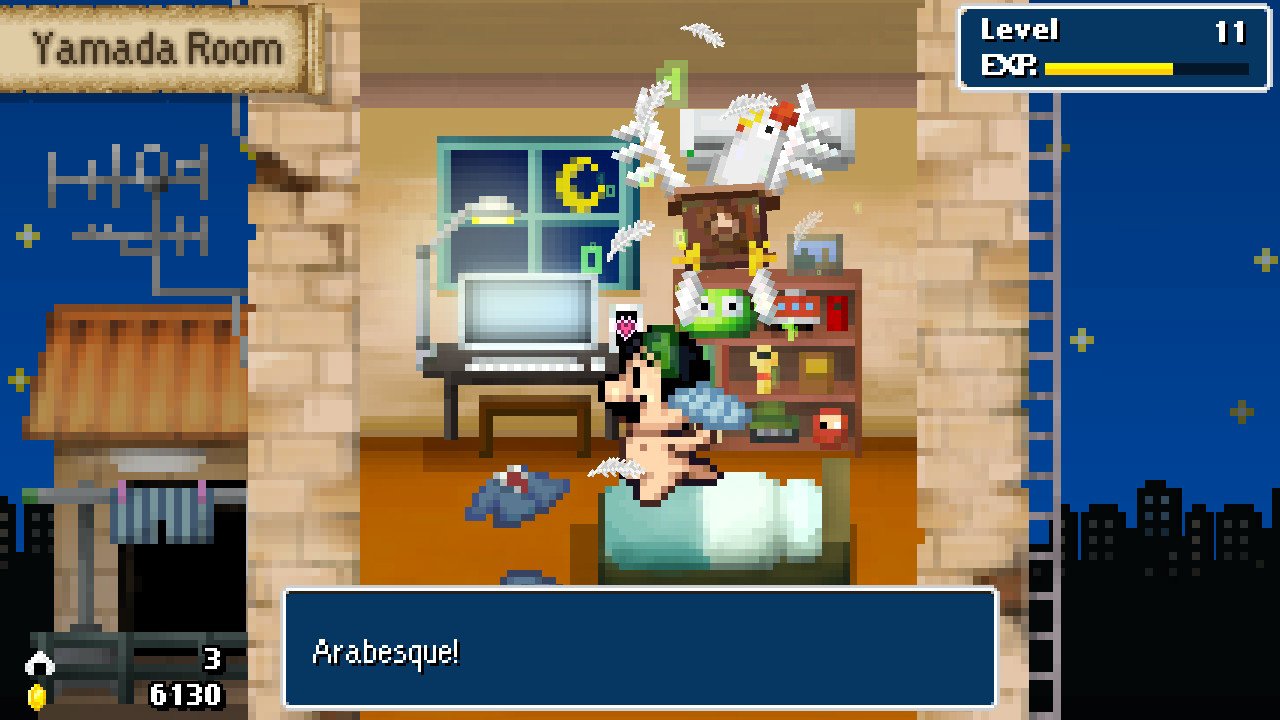 Those changes are more than enough for me to call this the choice version of the game, which given how much Onion Games and DMM are charging for it, it should be. But Dandy Dungeon was designed as a mobile game — a free-to-play one at that — and some of the concepts that made sense on smartphones don’t perfectly translate to console. Take rice balls for instance. In the mobile version, rice balls were used to revive Yamada-kun if he ever fell in a dungeon, or they could be given to hungry questers who’d then venture out and potentially score you some rare loot. Rice balls could be purchased with real money or earned in-game. With Onion Games doling out handfuls of rice balls to players every once in a while, they were pretty easy to come by.

On Switch, they’re ridiculously rare. I was given three rice balls near the start of the game, and in a foolish attempt to see if I could buy more with in-game currency when I ran out, I spent them all in a single dungeon. I’ve only earned a single rice ball since then. Clovers, which are used to buy rare items in the shop, are also hard to come by and trying to unlock everything the game has to offer will lead to an absurd amount of grinding.

Maybe I was too enamored with the original release to see it, but Dandy Dungeon is built around grinding the same dungeons for hours at a time. I don’t mind it because I love the gameplay formula, but it could be a hard sell for those who’d rather just run through it. Dandy Dungeon does try to make the grind more bearable by delivering special dungeons at regular intervals, changing up the layouts to the dungeons, and reviving defeated bosses for difficult rematches, but because the loot for each dungeon is randomized, you may end up like me, playing one dungeon 13 times in a row to unlock the final chest needed to get a gold trophy. 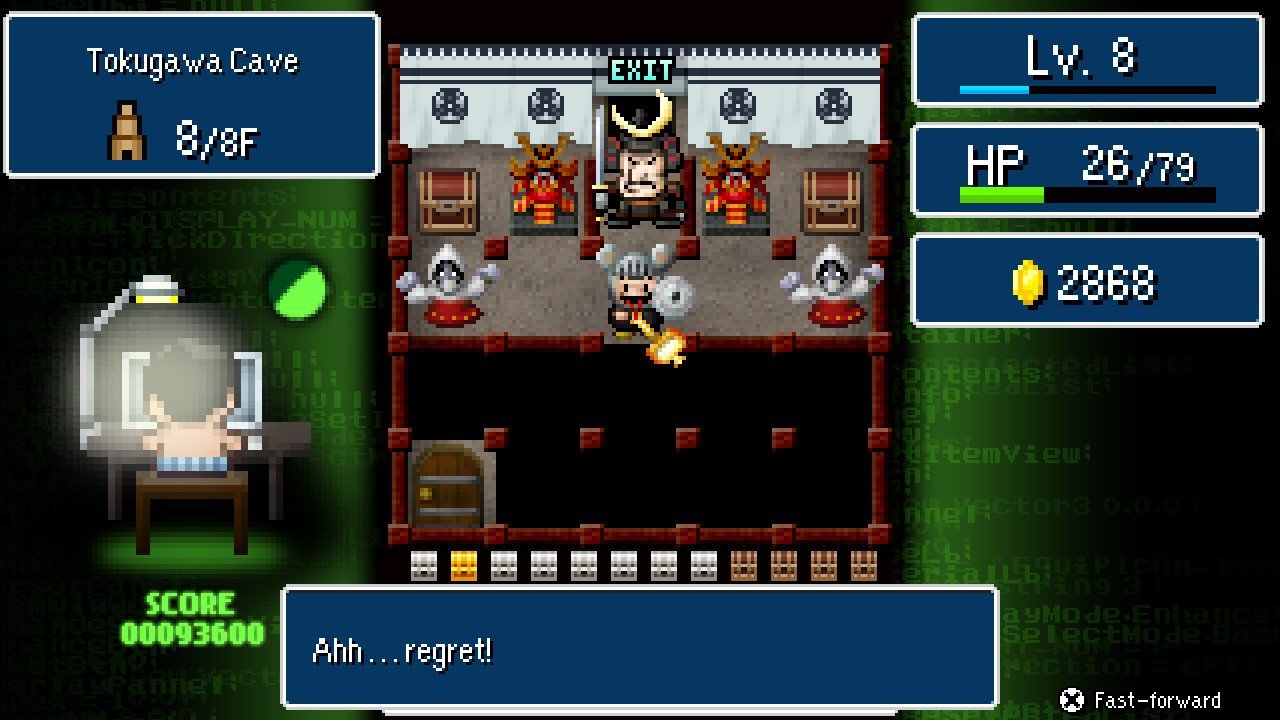 The only other roadblock I can see with Dandy Dungeon is its price. On mobile, it was free-to-play though you could spend a reasonable amount of money to get rid of the energy meter, the biggest deterrent in that version of the game. On Switch, Dandy Dungeon costs $24.99, and I feel this is another case of Onion Games overcharging for the product it’s trying to sell. Considering Dandy Dungeon 2, a complete sequel that was added for mobile players for free isn’t included at launch, it’s hard for me not to recommend waiting for a sale.

I’ve put 20 hours into this game and I know I’ll put at least another 20 trying to earn every costume and weapon it has to offer. To me, Dandy Dungeon: The Legend of Brave Yamada is worth the time investment. The changes made to the Switch port really do make it the superior version of the game, though until it has everything the mobile version had before it was taken offline, I’m not quite ready to call it the definitive version.

Dandy Dungeon: The Legend of Brave Yamada releases for Nintendo Switch on June 27.