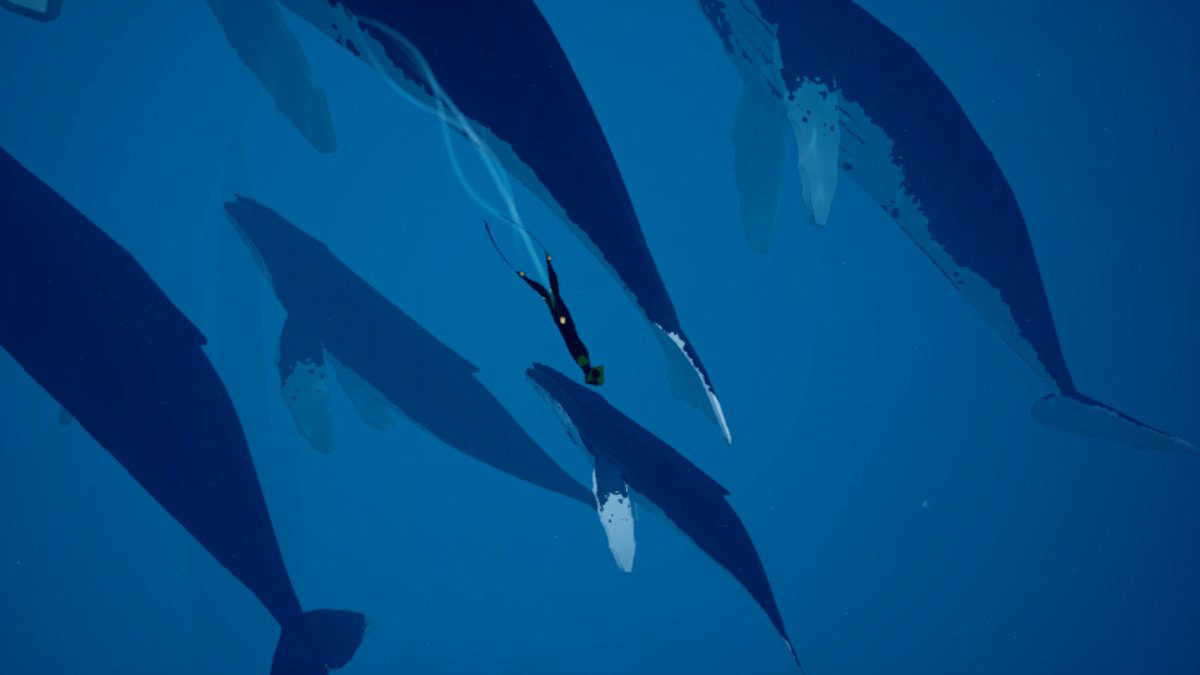 A Journey under the sea

Four years ago, I was in dire straits as a Wii U owner. The console was flopping, Nintendo couldn’t move units, and developers who all seemed to be on board at the beginning were nowhere to be seen. Many, many quality experiences passed me by in that era, but that’s changed. The Switch has been a complete 180 for Nintendo and it now seems like any game that’s anything is making its way to the system. For years, Nintendo fans were beggars, now we’re the choosers.

One of those titles that flew by my wayside was Abzû, the underwater adventure game from Giant Squid. As a massive fan of the Endless Ocean titles on Wii, I was in desperate need for another underwater exploration game. Turns out Abzû doesn’t exactly fill that void, and while the end product is a stunning sight to behold, it’s also one that falls short of its artistic ambition.

Abzû originally released two years ago for PlayStation 4 and PC, two pieces of hardware powerful enough for developer Giant Squid to actually craft its strong vision of an artistic, aquatic adventure. While the final product’s depths fell well in the shallows, you couldn’t deny it was a striking journey. From the sheer number of fish swimming around you to the way sponges and ocean flora react to your presence, Abzû is an entire ocean condensed into an aquarium.

It reminds me a bit of the stages in Captain Toad, albeit more avant-garde: small areas, brimming with life, that feature simple objectives requiring just a little bit of work to complete. In Abzû, the work involves light puzzle solving with the Diver. Swimming around in the environment is intuitive; in fact, this is the first game I can recall where I preferred inverted controls to standard. Each section of the ocean contains a few spots of interest and hidden collectibles that add to the portrait being painted about this world and its history. The story of Abzû is told through the environment, and if it sounds a bit like underwater Journey, it should because Abzû creative director Matt Nava worked on both games.

These types of expressive, often poetic adventures are still relatively niche in the industry and near non-existent on Switch. Gone Home is on the device and Firewatch is coming soon, but it can’t be easy to take games that absolutely depend on having extremely detailed visuals and make them work on Switch. Even the best examples of ported graphically intensive games — say Warframe — still don’t fully measure up to their original versions. Most Switch owners are used to compromises being made when porting PS4 or Xbox One games to the system, but there is always a question of exactly what those compromises are. Is it just less vibrant visuals or something more? For Abzû, Giant Squid and porting team/studio-for-hire Room 8 were able to keep the vibrancy of the ocean floor intact, but it comes at the expense of a reliable framerate.

So many beautiful moments found across the sea have their sheen tarnished a bit by a framerate that can’t seem to keep itself at 30 frames per second. Most notably, every time you ignite one of the four main pillars in the ocean, the framerate seems to drop by a third or so as the biome springs to life. These instances, especially the final pillar, are when it’s at its worst. The game actually does an admirable job of keeping everything steady during other magnificent set pieces, such as in the second section where the Diver is humming along an ocean current, dancing with the schools of fish there for the ride.

And this is true in both handheld and docked mode. Abzû is quite consistent between the two ways to play, and I switched between them throughout the one and a half playthroughs I ran. It’s a beautiful game, and an inconsistent framerate can’t take away from that. An intentionally slow and winsome odyssey like this is just as attractive at 20 frames per second as it is 30. When I was on the train, I had people looking over my shoulder as I dived deeper toward the ocean floor. At home, the colors of the sanctuary areas absolutely popped off my HD screen.

For the observer, Abzû probably looks spectacular. As the player, it’s quite clear the beauty does a lot to mask the fact there really isn’t all that much to this game. The story it tells feels as though it’s trying too hard to be deep and thought-provoking, but the gameplay mechanics that guide players through the narrative don’t complement that ambition. Swimming underwater doesn’t have the same imaginative zeal as flying through the air with your magic scarf or traveling across the breeze as petals from a flower. It’s too elementary and features like the ability to “meditate” as you watch specific types of fish swim about come across as contrived.

The world itself doesn’t do much to spark curiosity either. The underwater ruins exist firmly within the sphere of recognizable imagery and the sci-fi elements don’t exactly break new ground. It’s all supremely well-made, exquisitely animated, and vivaciously colored, but the sunken world of Abzû is more rote than radical.

Still, Abzû on Switch is not something I thought I’d ever see. While it’s not the best example of what’s possible with the system, it’s certainly a showcase for what developers can achieve if they have a passion for their project and the willingness to do what it takes to get it on Switch.

[This port report based on a retail build of the game provided by the publisher.]