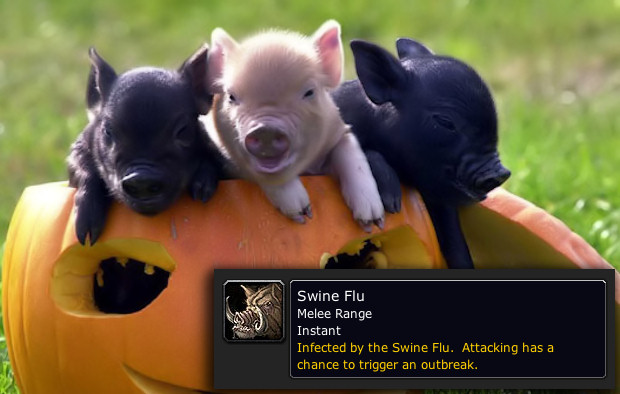 The most tragic casualty of the SCARY SWINE FLU PANDEMIC will most certainly be myself who, no longer able to take people freaking out over the stupid disease any longer, will commit suicide in the most loud and messy fashion possible. That said, let me add to the Swine Flu nonsense (which, like everything else, has now become fashionable) by pointing out that the terrifying disease has been in Azeroth for quite some time.

Our friends at Giant Bomb discovered that Swine Flu is a very real threat in World of Warcraft, able to spread with melee attacks and cause 120 Nature Damage every two seconds, along with a 70% speed reduction. In order to deal with this illness, you’ll need to get your disease-ridden hands on a Gleaming Surgical Mask of the Bear. For Christ’s sake, who comes up with this stuff?

The irony of course is that most WoW players will never have enough contact with human beings to ever get the disease in real life. With that obligatory joke out of the way, I should also point out the second irony that the Warcraft version of Swine Flu sounds about ten times scarier than the actual Swine Flu, which is terrifying everyone despite the fact that barely anybody reading this will ever come even close to getting infected.

SWINE FLU GONNA KILL US ALL!

Filed under... #Animals#World of Warcraft