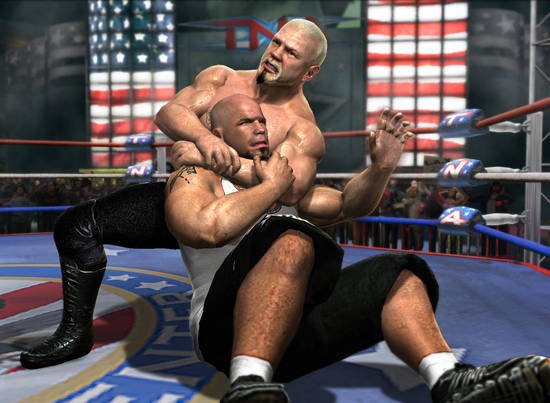 Midway has released a handful of new screenshots for their upcoming wrestling title, TNA iMPACT!, and they’re looking pretty slick. Literally. Look how much these dudes are sweating, for cryin’ out loud.

Truth be told, the Unreal Engine 3.0 powered game does look pretty damned good, but this good? I had a chance to play an early version of the game last October, and even though it wasn’t close to being complete, the game’s arcade-style action definitely caught my attention. Even then, the game was looking pretty good, but it definitely looked nowhere near as sharp as it does in these screens.

It’s not out of the question that Midway has done some tweaking between last October and today, and I certainly hope the game plays and looks as sweaty as it does in these screens. We’ll find out when TNA iMPACT! ships this summer for the Xbox 360 and PlayStation 3.