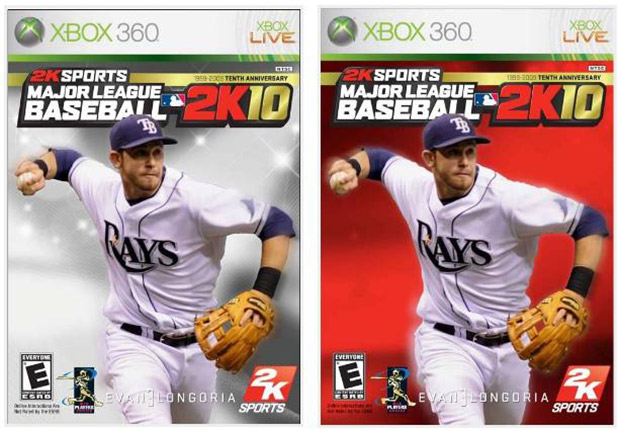 The Tampa Bay Rays may have missed out on the playoffs this year, but the team’s third baseman, Evan Longoria (no relation to actress Eva Longoria) may be cashing in on his two very good years in the major leagues. A confidential survey asked respondents to choose between four potential Xbox 360 covers for 2K Sports’ Major League Baseball 2K10, and each version of the box art features Longoria.

A survey taker broke the survey’s NDA by sending images of it (and the covers themselves) to Kotaku; you can see two of the four options above (hit the gallery below for all of them). Of course, you should take this with a grain of salt — we haven’t yet heard anything official from 2K Sports regarding this leak. But note that all of the cover artwork sports (*rimshot*) the same golden “1999-2009 Tenth Anniversary” banner that appeared on NBA 2K10 and NHL 2K10.

Longoria earned the 2008 AL Rookie of the Year award after a stellar campaign in which he made the All-Star team, and this year, he repeated as an AL All-Star and even won a Gold Glove. Personally, I’m a fan of the bottom left image (above left) — Longoria reminds me too much of Ben Affleck in the top two shots, and that’s never a good thing. Which one do you prefer?