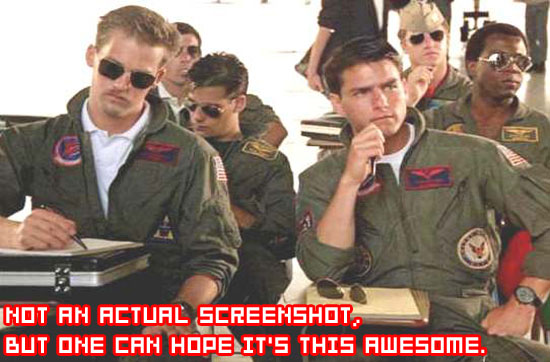 And not seconds after I was just telling my wife how there aren’t enough Tom Clancy titles, Ubisoft have announced a new air combat game that will take place in the Tom Clancy universe.

The yet untitled game is “set in the near future,” and not surprisingly involves hi-tech military weaponry, including technologically enhanced jet fighters. The game’s plot revolves around a private military force that has become so powerful, that it attacks the US. Oh, the mystery and the intrigue will be too much to handle, I’m sure.

“We are confident that this new brand will become the new benchmark for flight combat games and will be, like other Tom Clancy based games, an instant online multiplayer hit,” says Sebastien Delen, managing director of Ubisoft’s Bucharest studio, who are developing the title.

I can almost hear the crowds of people who are upset that this isn’t another squad-based third or first-person shooter. Me, I’m upset it’s not a Tom Clancy basketball title — let’s get on that already, Ubisoft.