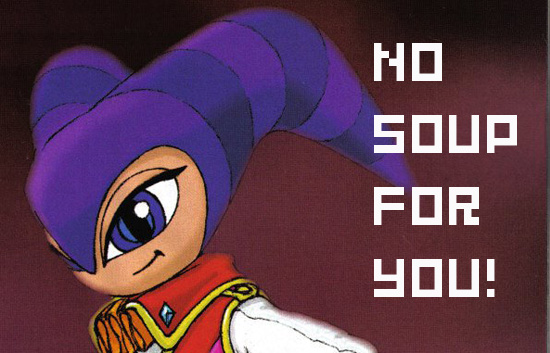 It’s days like this that make me wonder why I even hope for such coolness to hit the shores of The Land of the Free. It seems that the remake of NiGHTS into Dreams for the PS2 that I mentioned last week has been shot down for the US for the time being. Takashi Iizuka, game designer for the series, spoke about the title recently:

“There are currently no plans for the PS2 version to be released outside of Japan, and no plans for a Wii version either. It is being released in Japan, due to the high demand for the game. So there are no plans for a worldwide release… so far.”

Well….fine then. I can understand something like my beloved Taiko Drum Master not coming to the US (and it did anyway, sadly producing only lackluster sales) but with the remake of NiGHTS coming to the Wii, it seems like an obvious moneymaker to rerelease the beloved original. Somehow I think this news could change in future, but for now the answer is no. I kind of feel like throwing a tantrum.

[Via PS3 Center – Thanks Jonathan!]

Filed under... #NiGHTS: Journey of Dreams