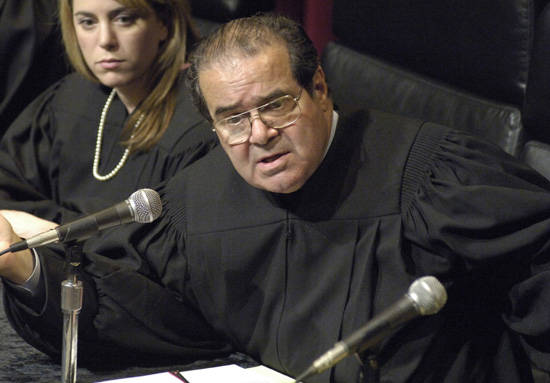 Today I had the rare honor of not only attending a Supreme Court argument, but also spending an hour and a half with Justice Scalia, the Court’s second most senior Associate Justice.

Those of you who are familiar with American jurisprudence are probably familiar with Justice Scalia’s reputation as an extremely conservative justice who is a strict originalist when it comes to constitutional interpretation. For those that are unfamiliar with the different schools of thought in constitutional interpretation, originalist believe that the terms of the United States Constitution should be interpreted as they were intended at the time they were ratified. The critical question asked by originalist is, “What would a reasonable person at the time of ratification have understood these words to mean?” (For a look at opposing schools of thought Google “interpretivists” and/or “living Constitution.”)

While the bulk of my time with Justice Scalia was focused on matters that are probably largely uninteresting to Destructoid readers, I did take this rare opportunity to ask the Justice his feelings concerning recent state videogame legislation. In particular, I asked him whether as an originalist he believed that state laws banning the sale of mature videogames to minors ran afoul of the First Amendment.

Hit the jump to see what the Justice had to say.

In his most succinct reply of the day, Justice Scalia replied that he did believe such legislation could be constitutional. He began by explaining his belief that sound constitutional precedent holds that minors may be subjected to prohibitions that adults are not — he instantly drew the parallel to regulation of pornography sales. However, Justice Scalia emphasized that unprotected speech, such as obscenity, which he was unwilling to define for reasons that are immediately evident to any constitutional scholar, can be prohibited from sale regardless of the purchaser’s age. I think the important thing to note here is that Justice Scalia did not suggest that violent and/or sexual content in games rises to the level of unprotected speech. In fact, he did not even suggest that videogames themselves are not protected by the First Amendment despite his strict originalist beliefs.

The implications of Justice Scalia’s answers are multi-dimensional. First, he suggests that upon appeal to the Supreme Court, at least one of the nine justices would affirm state laws that ban the sale of mature-rated games to minors. Second, his remarks suggest Justice Scalia believes that videogames not qualifying as obscenity (defined in a note following this article) are protected by the First Amendment.

Essentially, this seems to mean that one of nine Supreme Court justices believes the sale of mature games to minors can be regulated, but that the overall regulation of the medium would most likely be unconstitutional.

Mind you, Destructoid readers, that such a holding would not place a ban on parents buying mature games for their children; it would simply prevent minors from buying the games on their own and would leave parents to be parents. It is important to note that several lower state and federal courts are in disagreement with Justice Scalia. In particular, an opinion penned by Richard Posner, a judge I hold in the highest regard, as well as opinions penned by numerous other Circuit Courts have held that the government cannot prevent minors access to mature arcade games or from purchasing mature-rated console titles. What does the Destructoid community think? And, on the off chance that I am able to speak with another judge this year, what types of questions would you be interested in asking?

Note on “obscentiy”: The current test for obscenity was established in Miller v. California, 413 U.S. 15 (1973), and is typically referred to as The Miller Test. The test sets forth three prongs that must be satisfied in order for a work to be considered obscene. The three prongs are: (1) Whether the average person, applying contemporary community standards, would find that the work, taken as a whole, appeals to the prurient interest, (2) whether the work depicts or describes, in a patently offensive way, sexual conduct or excretory functions as defined by applicable state law, and (3) whether the work, taken as a whole, lacks serious literary, artistic, political, and scientific value.

Ed. Note: As this article has been gaining a lot of attention, I think it is important to make a few clarifications. First, despite Justice Scalia’s belief that videogame laws banning the sale of mature games to minors could be Constitutional, there are many other factors that could change his mind. American jurisprudence is firmly grounded in the idea that suits are decided on a case-by-case basis and a generalized response in an informal conversation is hardly the definitive answer. Second, as my language suggests, much of the latter half of this article is conjecture based on how Justice Scalia answered the question. Take that for what it’s worth.