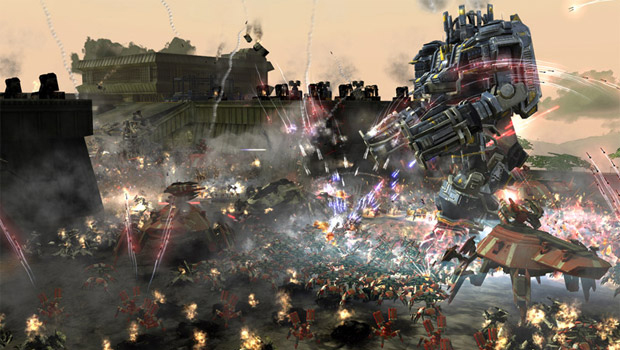 If you’re an Xbox Live Gold user and you’re looking for a demo to try, Square Enix has you covered.

Released today is a demo for Supreme Commander 2, what this press release I’m looking at calls, “the definitive console real-time strategy experience.” That’s a bold statement. You’ll be able to find out for yourself by playing through two of the game’s tutorial levels and two missions as one of the game’s three factions, the United Earth Federation.

I’ll give it a download. Why not? I’m always keen to see if games can manage to successfully carry over game genres that are typically ill suited for a particular platform. Maybe this could be the one to convince me that RTS can still be done well on a console. Here’s one way to find out.

The demo will open up to Silver members next week on the 14th of April. Check out a press release after the jump.

[Update — The demo does not appear to be up at this time. We’re asking around and we’ll let you know when we hear something.]

Square Enix, Inc., the publisher of Square Enix® interactive entertainment products in North America, announced today that it has released a demo for SUPREME COMMANDER® 2 for Xbox 360. Consumers will have a chance to experience the Xbox 360 version of the award-winning SUPREME COMMANDER franchise today.  The Xbox 360 demo is available to Gold Members via Xbox Live today.  The demo will be available to all other Members April 14, 2010

This riveting, first-look opportunity for consumers will contain two levels of the tutorial as well as two missions for the United Earth Federation (UEF), one of the three factions of the Colonial Defense Coalition.

o   The Cybran invasion force is on the run. Sensors have picked up a number of operational Cybran Mass Extractors off the coast of the Weddell Strait. Players will need to explore the islands in the strait and successfully destroy the extractors.

o   After refusing orders and refusing to surrender their Armored Command Unit, players are now public enemy #1 in the UEF. Colonel Rodgers has targeted New Cathedral, a colony where the players’ wife and child reside – they will need to take the most direct route to defend the colony. Unfortunately, that means traveling through the ruins of the Boolon Industrial Complex.

Set 25 years after the end of the Infinite War, SUPREME COMMANDER 2 starts with the galaxy reeling from the recent assassination of the newly elected president of the fragile Colonial Defense Coalition. The members of the Coalition – the United Earth Federation, The Illuminate and the Cybran Nation –blame each other, and the early rumbles of war can be heard throughout the galaxy.

Take on the role of three enigmatic commanders; former friends from each of the unique factions — The United Earth Federation (UEF), The Illuminate and the Cybran Nation — who get dragged into a conflict of galactic consequences

Explore a rich, character-driven single-player game which spans over 18 missions and delivers a new level of emotional connection to the RTS genre, or take the battle online for an exhilarating multi-player experience

Fight action-packed battles on a massive scale, waging war with enormous land, air and naval units in visually spectacular environments, brought to life by all-new rendering technology and a true evolution of RTS controls on both platforms

Upgrade and customize armies with new weapons and technology and deploy them instantly on the battlefield, turning a base-level tank into a high-powered, multi-barreled, anti-aircraft-sporting multipurpose battle unit

Deploy wild experimental war machines that can change the balance of power at any given moment. Experience a streamlined economy and redesigned UI that put the focus squarely on combat, battlefield tactics and high-level strategic decision making, and give improved player feedback in Strategic Zoom view