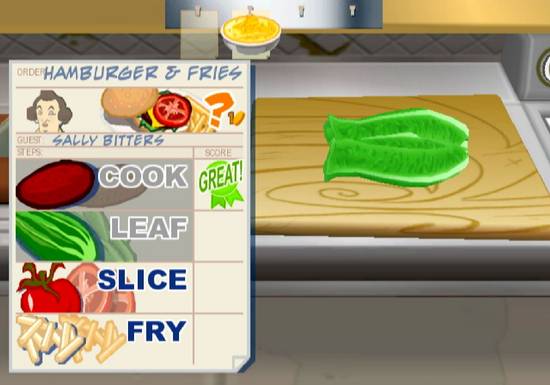 In 1982, no one could have guessed that the premise behind Burgertime would eventually give birth to an entire genre. Don’t even fight it — cooking has become a genre in the world of videogames.

Today, Zoo Games has announced the SuperVillain Studios-developed Order Up!, a Wii exclusive title set to hit stores on July 22. The game puts you under the toque of an up-and-coming chef on the fictional island of Port Abello. Players will not only make the food, but Order Up! will bring a “sim” element to the genre, as players build a restaurant from the ground up. We’re talking obnoxious customers, food critics, health inspectors … it’s going to be just like having a real job, except no one gets paid and no one eats any food. All for $39.99.

It’s an interesting premise — Cooking Mama meets The Sims meets Diner Dash. SuperVillain have been known mostly for their ports (flOw to the PSP, for example), but they’ve shown that they have a solid development team. If anything, it looks like they’re at least making an effort to design a fleshed-out, interesting experience for the Wii, which is more than a lot of teams can say.

A TASTY NEW DISH IS SERVED UP EXCLUSIVELY FOR Wii™ AS ZOO GAMES ANNOUNCES ORDER UP!

New York, NY, April 23, 2008 – Gamers prepare to feast as Zoo Games today announced Order Up!.  Developed by SuperVillain Studios, LLC., Order Up! is a full-featured cooking and restaurant management video game that promises players a much richer and more entertaining experience by expanding beyond basic slice and dice gameplay.

“The emerging cooking genre has significant potential beyond the simple, linear gameplay offered by other games on the market,” said Lee Cummings, Creative Director. “Order Up! Gives players the ability to not only prepare and cook a meal, but to do so while juggling other orders, handing off tasks to assistant chefs, working inside restaurants you can improve, and serving the food to customers with distinct personalities and tastes in food. The frantic pace, the use of the unique Wii Remote™, and much, much more, makes Order Up! the ultimate cooking sim.”

As a promising new chef on the island of Port Abello, players of Order Up! get to build their own culinary legacy and restaurant empire from the ground up. Rising from humble beginnings as a grill cook in a fast food restaurant, the player comes to grips with dozens of different ingredients and many different cuisines, from classic American Diner food, to Mexican and Italian dishes.  During this journey, players will deal with the headaches and hazards of running a working restaurant kitchen, picky patrons, quirky assistant chefs, food critics and health inspectors.  Order Up! is a deep, fast paced game, full of personality, which promises to push the cooking genre to its limits.