One after another, I watched everyone play Superhot wrong. They all made simple mistakes, threw their hands up in pleasant frustration, and then made the same mistakes again. Every single person was bad, and it was kind of amazing to witness.

The reason everyone had such difficulty grasping Superhot‘s gameplay is because it subverts what the past decade or so of playing video games has trained us to do. When we have a gun in our hands, we need to quickly shoot the other guys with guns. If we don’t, death is sure to follow.

That’s the exact opposite of what Superhot asks its players to do. Drawing inspiration from the likes of Max Payne and the The Matrix (the latter doubly true in a “the man’s sending everybody to capture you” kind of way), Superhot wants everyone to stop and make the most of every single moment. That baddie’s going to shoot at you, but you have to facilitate it.

“Time only moves when you move.” That’s Superhot‘s very to-the-point slogan. The game’s stuck in a perpetual bullet-time that slows to an absolute crawl. Upon touching the left stick, it speeds up to the degree that you sped up. It’s important to manage these movements almost like a resource of sorts. The polygonal enemies will swarm in the event that you’re wasting movements.

The most challenge lies in figuring out where exactly these enemies should be shot. Significant leading is required because they aren’t going to stay where they were when the bullet was fired. Stylish headshots are tempting, but the smart money’s on a well-placed round in the body. It accomplishes the exact same thing, but again, several years of experience have taught us to aim for the dome.

Before long, a pattern forms. Slowly line up a shot, inch along in any direction at a safe pace until the bullet hits, stop and find the next foe. It’s easy to understand but so counter-intuitive for most. That’s why even when they showed restraint, they eventually gave into the urge to press forward quickly. That’s a death sentence in Superhot. 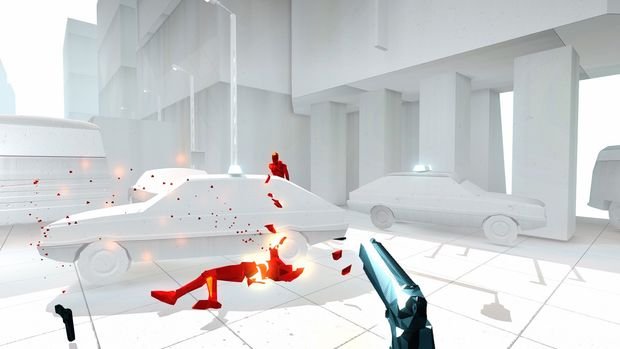 If you’ll notice, I’ve been using most of this preview to critique others’ performance at Superhot. That’s because I played it on VR at E3 2014, and I was very good at it. Blazed through the demo, in fact. This non-headset business would be a breeze.

Dammit, I just died. Okay, no problem, just a quick restar–son of a bitch, I died again. This doesn’t make sense. I know what to do, I’m just not doing it for some reason. Oh, god. Am I playing just like all these foolish other journalists? Ugh, this is embarrassing.

That’s exactly what was happening. When I was cool, calm, and collected, Superhot was easy to manage. The second I got either too confident or flustered, everything went awry. The ability to throw the player between those two mental extremes at such a quick pace is a defining attribute of the game. And, a constant source of anguish. Just take it slow, and everything will work out.