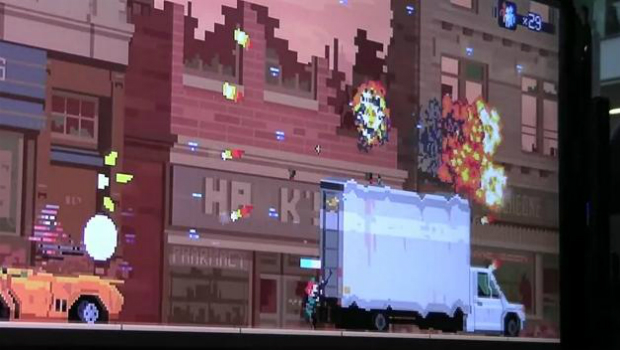 Join us in the above video as Holmes takes a look at our PAX East Dtoid Pick of the Show: Super Time Force. The crux of the game is that you basically get to “screw up time” while roaming around the universe in a sidescrolling Contra-esque format. In addition to some awesome sharp retro graphics (done by only two people!), it also features one of the coolest things I’ve seen in an action sidescroller to date: the time-rewind ghost mechanic.

Essentially, whenever you die, time will rewind to the beginning of the stage and your former dead self will come back in ghost-form (similar to time trials in racing, or say Rayman Origins). But, unlike other games that feature ghosting, the key part of this mechanic is that you can work together with your past self to best the stage, and even safe yourself from death – whoa.

Super Time Force is fairly early into development, and is slated to be released on XBLA. A YouTube commenter said it best: bring this to Steam! This would go great in an indie bundle with Dustforce.