Play as a group of badass time-traveling crazy dudes

We’ve seen Capybara’s Super Time Force at the last three PAXs in a row, and every time there have been some major updates that improved the overall quality of the experience. This past PAX East saw the biggest change as players now have full control over how they control time.

Under the old system, once you died the game would automatically rewind back to the very beginning, forcing players to sit and wait until they can start again. Now, players at any point — alive or dead — can press a button and rewind to any point they so desire.

It was far easier for the team at Capy to make sense of the time-traveling elements prior to this change. Now “it makes the game infinitely more complicated to make,” Nathan Vella, co-founder and president of Capybara told me. “We’re f*cking ourselves over in a way, but it’s fun, it’s crazy.

“It breaks our brains! We end up in these crazy Back to the Future moments where we’re like ‘Holy crap, our mom is trying to kiss us!’ It’s creepy, and you know, butterfly effect, somebody dies, etc. That shit happens when we’re talking about, like, ‘Why don’t we just have the door open?’ and we’re like ‘Ah, the door can’t be open because if it opens for the first character what if you get there first and then it closes after you and then the other characters technically shouldn’t be able to walk through it!’ Sometimes we try and it makes us hurt, in the brain.”

As Nathan and the team were adding in more content, they began to realize that the way their time-traveling mechanic was implemented was hurting the overall experience for players.

“We’ve been working on the game for a while and when we were first working on it we were like ‘Oh this is really fun! You die, you rewind, you play with your past lives, great!,'” Nathan explained. “But as we started going through building lots more levels, really trying to beef up the content, and trying to think about the game like how do you play this for three hours, we started realizing all this forced waiting while you’re rewinding would slow down the game [and] you spend a lot of time watching a rewind. You’re not in control of it anymore, which is kind of weird because you’re this group of badass time-traveling crazy dudes. You shouldn’t have to just sit there and rewind.

“So we spent a lot of time trying to figure out what’s awesome about Super Time Force. It’s controlling time to figure things out, to optimize, to really just be able to kill tons of shit in the way that you want to do it, and to be playing alongside all the versions of yourself.”

The team then spent time going back and forth arguing over what would work best. Not quite an easy task as time travel is confusing and it can break your brain trying to think of all the variables.

But then the team came up with the idea of giving players control over when they can rewind with the simple press of a button. Players can now decide how to take on a section, and if they didn’t like the results of their action, they’ll now just be able to rewind and play through the section again with another character, all while playing with their past versions still. 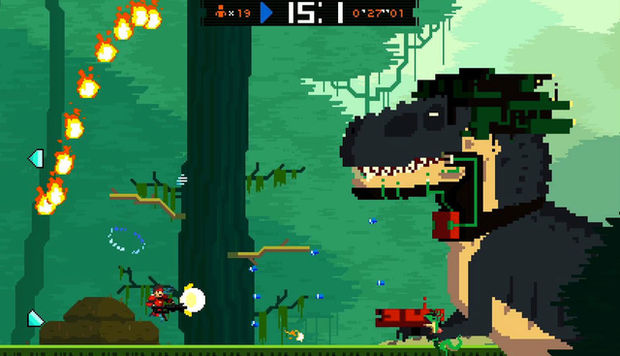 “So it gives you this really you have control over time [feel],” Nathan explained. “Now you actually get to say this is how far back I go, this is when I go, I want to play this character at this moment — and so it basically just opens up the fact that now there’s never a point in time Super Time Force where you’re just hands off. Now you’re always in control of time, and I think that really takes it from something that’s like ‘haha cool’ to now it actually has that meat that we wanted it to have.

“It also means that you’re never not playing Super Time Force the way you want to play Super Time Force. You have that real finite almost like minute control over how you play the game. So people can hop in, have a lot of fun running and gunning blowing shit up ’cause that’s really what the game’s about. But at the same time, if you want to play it hardcore you can go in and choose these really tight rewinds and optimize your gameplay, strategize who would work best, ’cause we’re designing it so it kind of has that Mega Man feel where certain characters in certain moments do better than other characters. You can actually just time out and rewind and play with that idea.

While this major gameplay change has made the game more complicated to design, it’s ultimately made for a better overall product, according to Nathan.

“I’m really stoked about it because instead of just being this really cool game that we’re working on, now it’s this game that feels like it has that refinement of a Capy game. That means a lot to us, to make it feel like it hits that certain, I don’t know, I always feel like those design things are tangible. Like, players might not think about it but they’ll totally feel it when you put a controller in their hand. I think just something as simple as ‘Oh, I control the rewinds now, it’s me! It’s not the computer that just removes control, it’s my control.’

“It makes time more of an important factor. It makes the time pressure of you only have 30 seconds or more more tangible. Sometimes you have to rewind back because if you don’t rewind far enough back you don’t have a chance to move forward faster which means you’re going to run out of time.” 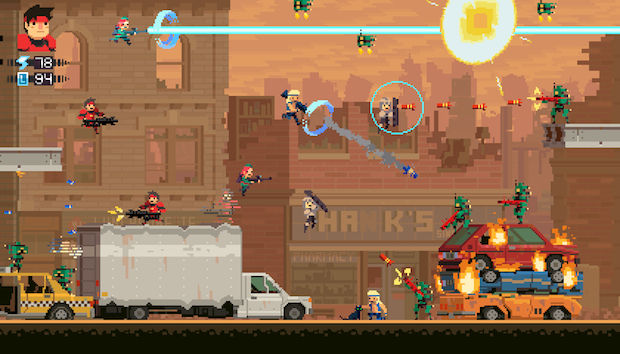 Yeah, you might need to re-read that last paragraph a couple of times. While it sounds complicated, it makes sense once you get the controller in your hands. Nathan stressed to me that you can still go in and have mindless fun on a base level, but there is a lot of optional depth in the experience that players can dive into and get more of an investment out of.

Super Time Force is aiming for a 2013 release on Xbox Live Arcade.