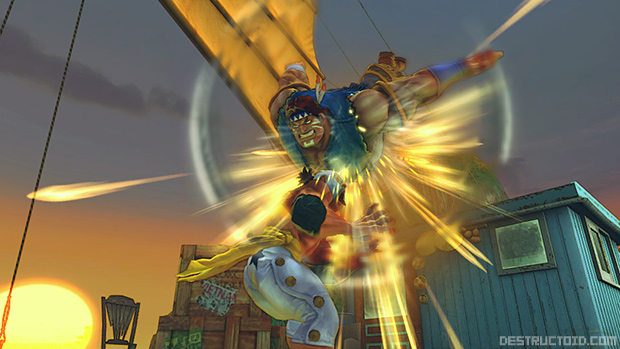 Hey, remember when Street Fighter IV producer Yoshinori Ono informed gamers that there won’t be an arcade version of Super Street Fighter IV? Well, there may still be some hope for arcade fans. I spoke with Seth Killian, Senior Manager at Capcom and Street Fighter guru, at a press event on Wednesday, and when I asked him about the possibility of SSFIV in arcades, the first thing out of his mouth was, “That’s a complicated football of a question.” (A sports reference! I was hooked immediately.)

Killian pointed out that an arcade version is “not very relevant” for America, though he quickly followed that up by noting that he has many friends who run arcades here. But there’s been an outcry, among Japanese fans in particular, for SSFIV in arcades. Killian hinted at a debate inside Capcom, as well as a possible ideological shift at the company, saying that an arcade version of the game “has a lot more to do with what’s going on internally,” but offering a sliver of hope: “We’re not ruling it out yet.”

And for the record, Killian is rooting for it: “I would love to see it; that doesn’t mean it’s going to happen. More to be said on that front, I hope.” So keep voicing your opinion, folks — in this case, you definitely don’t want to STFU.

I’ll have much more on Super Street Fighter IV coming up next week, including a (hands-off) preview, so keep your eyes peeled!