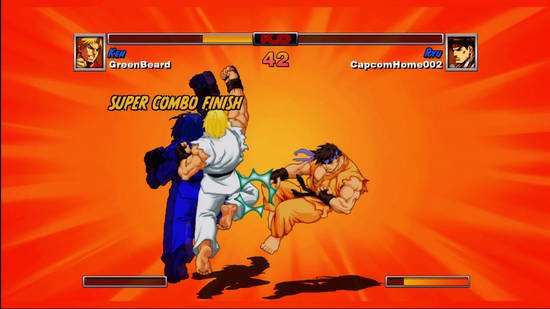 No doubt many of you are salivating in anticipation for the release of Super Street Fighter II Turbo HD Remix. Well lucky for you, Capcom knows just how bad people want this game. They’re going to be offering a Beta test of HD Remix that will be packed along the release of Wolf of the Battlefield: Commando 3 for Xbox 360 owners.

The Beta test will last for eight weeks and only Ryu and Ken will only be playable in the Beta. Only one stage will be available and some of the new modes such as Quarter Match Mode (spectator mode) will be activated.

The main purpose of this beta is for Capcom to stress test the online aspect of the Turbo HD Remix. They want to make sure that everything goes smoothly once the game comes out. This will also be the first time an XBLA game is publicly Beta tested through Xbox and second time total for any type of an Xbox game for a public Beta test (Halo 3 through Crackdown last year).

So who here is now planning on getting Commando 3 just for the Beta of Super Street Fighter II Turbo HD Remix?