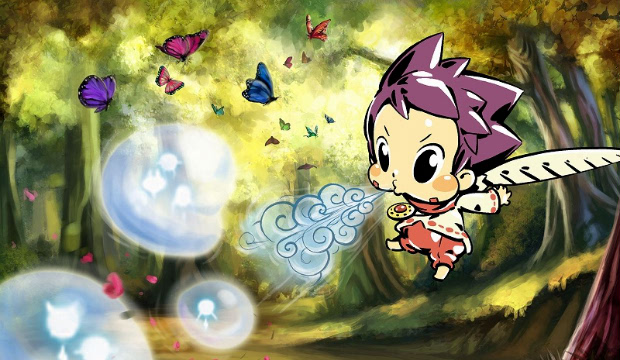 If the search function on the top right of the screen is accurate, then Mekensleep‘s action-puzzler Soul Bubbles hasn’t gotten nearly enough attention from the Destructoid editorial staff, which is a damn shame because the game is so good.

So, I’m going to rectify that with a bit of news: Soul Bubbles is making its way to Japan in about two weeks, courtesy of Interchannel. More specifically, a game almost similar to, but not quite like, Soul Bubbles called Awatama is being released in the archipelago.

The most obvious difference is that the game’s protagonist, a young shaman in charge of ferrying souls to the after life, got a full make-over. The pantless, hairless hero got some new digs in the move, as well as a purple mane of Super Saiyan hair. Compare the concept art above to the art on the Soul Bubbles official Web site, and you’ll see how much Mekensleep had to change in order to localize Soul Bubbles.

According to an N-Sider interview with Mekensleep’s Olivier Lejade and Omar Cornut, however, the new protagonist isn’t the only thing that changed: they re-worked a few of the levels, tweaked the difficulty curve, and added a second save profile.

If you were interested in Soul Bubbles and can read Japanese, it seems like Awatama might be the definitive version. Alternatively, it retails for about $20 here in the States.

For a look at some Soul Bubbles/Awatama gameplay (and to keep this post timely), hit the jump for a new Japanese trailer for the game.