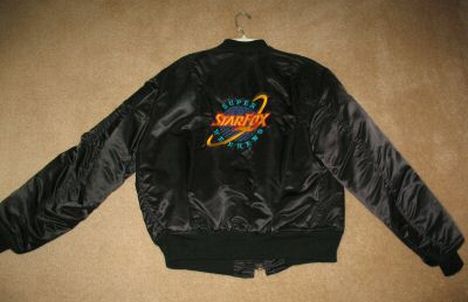 Rare videogame collectors, get your wallets out. The sassy RawMeatCowboy over at GoNintendo came across this auction on eBay for a rare Star Fox jacket. The jacket was only given out to people that got specific high scores during the Star Fox Competition Nintendo hosted back in ’93.

This jacket was only worn a couple of times and is a size medium. The auction also comes with a couple or rare Star Fox pins, the two original documentations Nintendo sent the seller and a copy of Star Fox for the Super Nintendo. Ten percent of the proceeds will go to the Marine Toys for Tots Foundation.

This story reminds me of the time I entered the Blockbuster World Video Game Championship II for Donkey Kong Country. I lost in the first round because I didn’t understand what the hell I was supposed to do (I actually played through level like I normally would, finding the secrets and all). I did win a pack of awesome Marvel trading cards at least. So, who’s going to try and get this jacket?