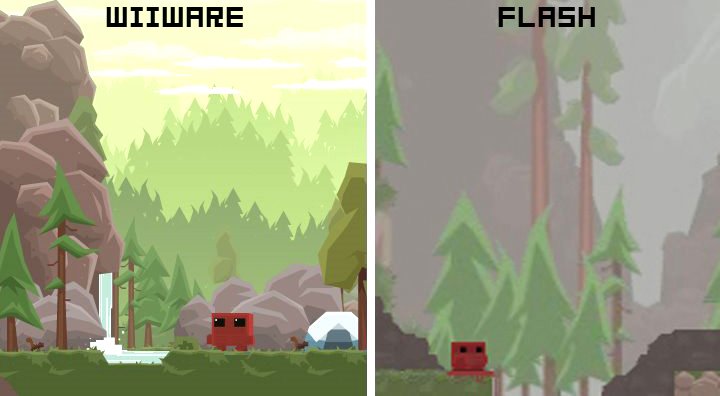 The more I hear about Super Meat Boy, the more I want it.

According to this interview with the Escapist, the game will feature full-screen stages like the type found in the original, new scrolling-screen stages, boss battles, warp zones, over 100 levels total, as well as co-op, versus, and party game modes. Good news to be sure, but it’s all small potatoes compared to this megaton announcement: 12 currently unnamed indie developers have given the Super Meat Boy team permission to use their creations as unlockable, playable characters. What exactly constitutes being “indie” these days is hard to say, but from where I’m standing, this could mean anything from Braid‘s Tim, to the knights of Castle Crashers, to even the World of Goo goos making their way into the game

In short, Super Meat Boy may end up becoming the indie answer to Smash Bros.

Clearly, SMB is shaping up to be more than just a port of a flash game. Visually, the title has also made huge leaps forward from its freeware origins. This entry from the game’s official blog shows the evolution of Meat Boy from a simple slab of bleeding flesh to a action packed dynamo. The fully animated sprite sheet here is truly a thing of beauty. Fans of 2D sprite based graphics, you need to see this.

So what to you guys think, am I crazy for being so stoked for this game, or does the idea of playing a new indie crossover, co-op platformer get you all hot as well?