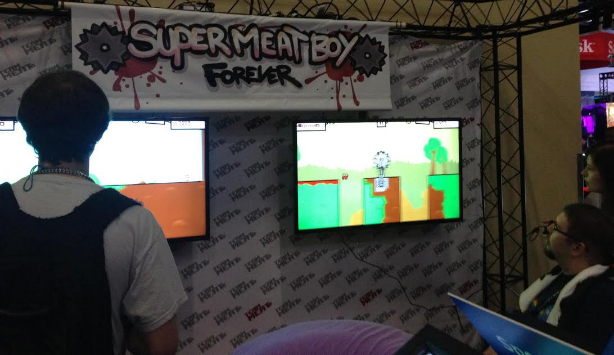 Coming to PC and mobile, not just an endless runner

[Update: Edmund McMillen wrote a blog post to explain that Super Meat Boy Forever uses auto run, but is not an endless runner. So it’s more like Bit.Trip Runner than anything. Though there is an endless mode with daily high scores. It also, “will feature a full story, 6 chapters, and double the bosses the original game featured.”

McMillen also promises it won’t nickel and dime you and that it’s not a simple one button affair. Super Meat Boy Forever is two months into development. Development of the cat lady sim Mew-Genics is on hold until it’s finished, sadly.]

We were all clever enough to guess Team Meat’s tease “A Voyeur for September” was probably Super Meat Boy Forever, which the team is showing off at PAX.

Less of us were clever enough to consider that “Forever” might imply an endless runner, which is what the game is. It’ll be coming to PC and tablets when it’s finished.

Joystiq has the show floor Vine.