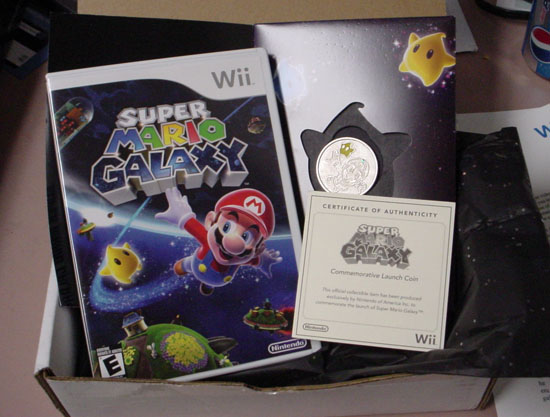 After days (weeks? [months!?]) of painful anticipation, Super Mario Galaxy finally showed up on my doorstep, thanks to a kindly ol’ FedEx delivery driver who knew not the bounty of wonder that he carried. Nintendo also sent along the pre-order bonus commemorative coin complete with certificate of authenticity, just in case Chester thinks I’m lying about the game and threatens to fire me for being a dirty fibber. Whoa-ho there, boss — certificate of authenticity.

Anyhow, this game will likely be eating up the better part of my life until I draw the experience towards a solid conclusion, capping the whole fandango off with a review of Nintendo’s flagship release. Look for that in a couple of days. For now: doors have been locked, obligations deftly ignored. Candles lit? Sure, why not. A new Mario platformer is cause for celebration, maybe even self-inflicted public humiliation. But since such antics are pretty much standing orders for a reviews editor, I might as well get this show on the road.

Update: Having dropped a solid three hours on the game and nabbed 16 stars, I’ve got some thoughts to share. Hit the jump for some Galaxy impressions.

This is, beyond any doubt, the first “next-gen” game that the Wii has seen since it was released almost a year ago. Though still underpowered compared to its bretheren and genre peers like Ratchet and Clank Future: Tools of Destruction on the PS3, the art style is so breathtaking that you almost forget the platform on which you’re playing. The game runs butter-smoov and has a number of tricks up its sleeve that’ll really merit some double takes.

The controls, as I had suspected after giving the game a shot at E3, take some getting used to. The constant shift of perspective mean the player has to keep on his or her toes as to which direction Mario will go when, y’know, you’re on the bottom of a planet. For the most part it works, but something about it doesn’t feel quite as tight as the controls in Mario 64, owing (I’m assuming) to the complicated gravity swaps and such. Once you get the hang of it, though, swingin’ around a planetoid is an absolute gas.

The camera’s still got a few flaws, but it’s not quite as horrific as it had been in Sunshine. The developers at Nintendo EAD Tokyo employ a scripted camera on certain levels (the more “traditional, larger planets) that follows the action without too much obstruction. It works out well, though I wouldn’t mind a wider perspective on some of the levels in which the camera gets a little too close for comfort.

About thirty minutes ago I completed the game’s first major boss battle, which alone stands as one of the most fun levels I’ve ever played in a 3D Mario title. The scope and scale of the fight was epic as hell and though it was a smidge easy, the sense of accomplishment was there. So far, my favorite level has been the Space Junk galaxy, in which Mario must navigate piles of crap drifting through the void. It’s a weird, decentralized sort of experience peppered with little planetoids and even an occasional airship bombardment to shake things up, and in no other level thus far have I really gotten so into the whole space element of Mario Galaxy.

And what the hell, the hub world is actually functional, extremely easy on the eyes, and implemented in an unobtrusive way? This isn’t the 3D Mario that I know, damnit!

As much as I loved Super Mario 64, in retrospect you have to admit that the game was based on the same handful of activities, repeated over and over in different arenas. Collect the coins, knock the bully off the platform, and so on — while this certainly isn’t to say that this was at all unfun, a few hours into Galaxy you begin to notice just how much crap there is to do. Sure, it’s all structured upon those fundamental elements of gameplay, but throughout the galaxies there are so many different places to go and things to do that I’m hard pressed to say that I’ve done the same thing twice at all since I set out.

In short, my first few hours with Galaxy have been just about the most fun I’ve had this year. Keep your eyes out for the review proper in a couple of days, once I complete the game.