It would take a lot to top the original Super Mario Galaxy. After all, that game set the standards of what the Wii is capable of doing with both graphics and gameplay. For Nintendo to make a game that was that good from the ground up would be silly. Thus, it’s pretty easy to see why they would just build on the Galaxy motif with Super Mario Galaxy 2.

Now, if you saw Nick’s hands-on with the game just last month, you know that there are some new additions to it, especially in regards to Yoshi. Since then, we’ve been fortunate enough to see a newer build of the game, one that includes all new “galaxies” as well as the addition of new power-ups and abilities for both Mario and Yoshi. It is certainly nothing that shakes up the Galaxy formula, but these additions, among other things, definitely highlight the idea that Super Mario Galaxy 2 is its own game.

Hit the jump for hands, hats, and… er… tongues-on with Super Mario Galaxy 2.

Right away, I was initially shown the new hub world of Super Mario Galaxy 2. Contrary to some initial reports, there is in fact a hub world. This ties into the story of the game, which Nintendo is still declining to comment upon. While not exactly the sprawling ship of the first game, this one is in fact a grassy planetoid ship shaped like Mario’s head. You’ll apparently be unlocking things on this ship as you progress, and the ship changes as you play. However, you must actually travel to the game’s levels yourself using the ship, so that’s where the level select comes in. It’s basically a space version of the Mario overworlds we’ve played for twenty years, only instead of Mario walking form point to point, he flies this ship. 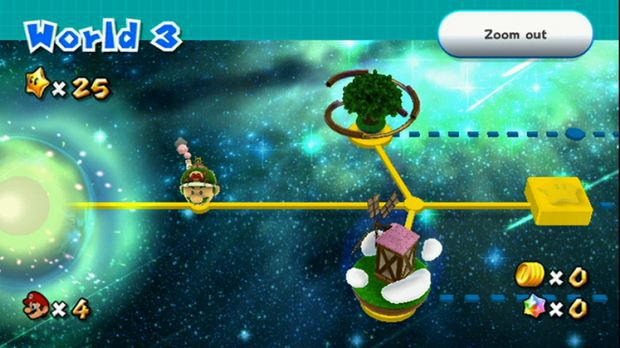 Like I said, power-ups will make up a big element of the game. Returning to Super Mario Galaxy 2 are the Bee Suit, Fire Flower, Invincibility and the Boo Suit, but it looks like the Ice Flower is AWOL, as I could not get a confirmation on its return. Thankfully, for those who remember Mario ice skating and wall jumping up frozen waterfalls, gamers will be flipping switches that will freeze sections of water, such as seen in the “Cosmic Cove Galaxy,” a tropical water-themed area. Unfortunately, there’s no word on the Spring Mario power-up’s return.

Fortunately, Nintendo has much more interesting power-ups in store. Already shown is the Spin Drill, a fantastical device that allows Mario to…drill. Like Nick said, this device is useful for certain boss battles, and certain levels. I was unfortunately not shown the Spin Drill; however, I was shown the next best thing: the Rock Mario power-up.

Rock Mario power-up, eh? This one, courtesy of a rock mushroom, outfits Mario with a craggy gray hat that, with a shake of the Wii Remote, causes Mario to roll up into a giant rocky ball and charge forward at great speed. Great for breaking crystals and smashing baddies, Rock Mario is very difficult to control and can easily send you careening to his death. This power-up was shown in the rocky “Boulder Bowl Galaxy,” where planetoids take on a muddy and granite appearance, and the end boss is the gigantic and adorable Rollodillo, a cheeky armadillo who has a big blue butt that must be…rammed…with the Rock Mario power-up. Yeah. 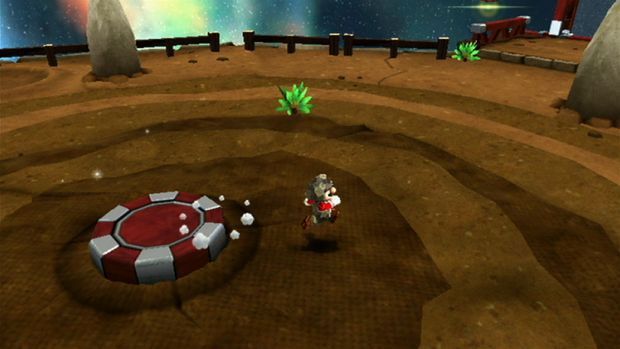 That’s not all, as Yoshi is able to transform as well. Typically green, with certain fruit he can become a teal, bloated Yoshi capable of flying; an orange Yoshi ready to dash at high speeds; and now a yellow Yoshi. This yellow Yoshi is courtesy of the “Bulb Berry,” which is of supreme importance in the “Haunty Halls Galaxy,” for example. This “ghost house” has disappearing floors, and when Yoshi eats a Bulb Berry, he glows and makes the floors and walls visible, which reveals the only ways to reach certain stars. Just like in previous previews, Yoshi’s tongue is very important, capable of grabbing objects and enemies, as well as swinging from specially placed flower devices.

Finally, there were two more levels shown to me purely as examples of Super Mario Galaxy 2‘s gameplay. “Puzzle Plank Galaxy” is a DIY-themed zone, complete with plenty of falling planks of wood and saws making traversing more difficult. There is even a country-folk remix of classic Mario tunes. In the level “The Puzzling Pictureblock,” the primary goal is to butt-stomp a wooden puzzle so that an image is formed of the boss character. Simple, sure, but plenty of fun.

The last level I was shown was from the “Honeybloom Galaxy,” which was a 2D perspective level where Mario traverses the exterior of a giant cube. Helping out is the bee costume, but new enemies make things problematic, and giant grapes will bounce Mario in a manner that’s equally helpful as it is frustrating. 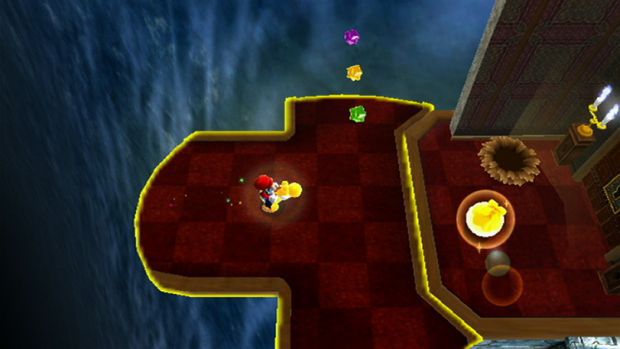 A lot of talk has been made about Super Mario Galaxy 2 and its difficulty. I can make it clear here: this game is much harder than previous Mario games. I died on each level at least once, and it looks like this might be a Mario game that really makes gamers struggle. Far from a bad thing, I suspect the game will be much more hardcore than people will initially expect.

Other new additions include “Comet Coins” that, with enough collected, will unlock harder challenges in certain galaxies. As well, there are tiny little details that really charmed the pants off of me. For example, the turtle shells that boost Mario through water levels now come with cute little brake lights with the tap of the Z-button. Another was the race-against-the-clock coin collections. These little challenges are pretty damn difficult, but if you succeed, your Wii Remote will clap a loud applause in your success. They’re small touches, but they fill the game with the charm we’ve come to appreciate. 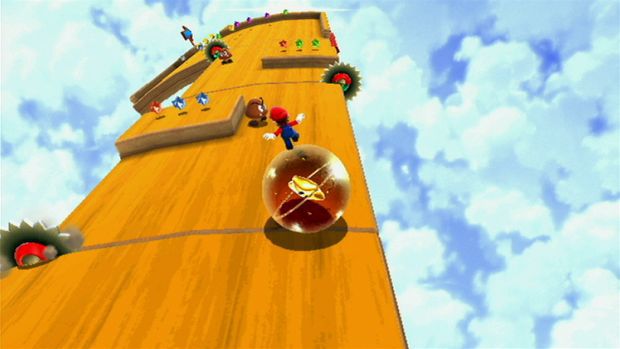 Graphically, Super Mario Galaxy 2 holds true to the standard-setting original, as this game is damn sexy. I’m sure there has been some graphical boosts somewhere, but that is not important. Other than Nintendo’s limitation to 480p, the game is gorgeous to look at, and like the original, is practically indistinguishable from many titles of the more powerful consoles.

Now for the negatives: is Super Mario Galaxy 2 all that fresh? No more so than New Super Mario Bros. Wii was fresh compared to New Super Mario Bros., yet that did nothing to diminish what makes those titles special and worth playing. Is it worth the attention of those who are not major Mario fans? To that question, I might say no. If you somehow didn’t like the original, you are certainly not going to change your opinion here. However, if you love the Galaxy series, you would be silly to ignore it this May.