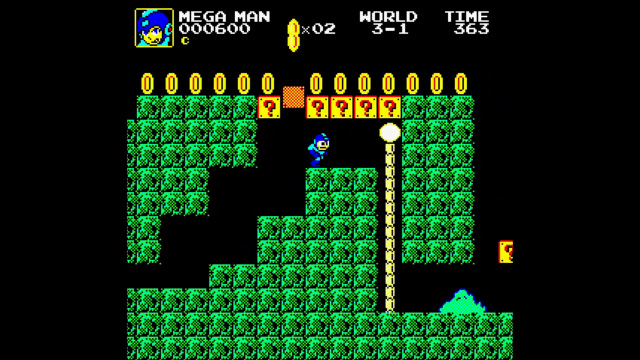 Three years ago as of yesterday, indie dev Exploding Rabbit’s Super Mario Bros. Crossover was unleashed online, and the reception couldn’t have been warmer. For the benefit of the unfortunate few who haven’t heard of this darling fan tribute, Crossover is a tile-for-tile remake of Super Mario Bros. but with the ability to swap Mario out for a number of NES heroes, like Link, Bill Rizer, Simon Belmont, or Mega Man. The game was later expanded with more characters plus graphical skins to emulate the look of other NES, SNES, and Game Boy games.

Version 3.0, scheduled for some time in May or June, will introduce all new stages taken from Super Mario Bros. Special, an obscure Japanese exclusive for the NEC PC-8801 and Sharp X1 home computers. There will also be rearranged stage layouts depending on your selected difficulty, so what was once a leisurely bridge stroll over a crystal clear lake could now be a perilous platforming challenge across a molten pool of lava.

Finally, I’d like to remind you that Exploding Rabbit is also working on an original title called Super Retro Squad, which is essentially Crossover just with new characters directly inspired by the NES stars. Once 3.0 is out and about, development on SRC will most certainly kick into high gear.