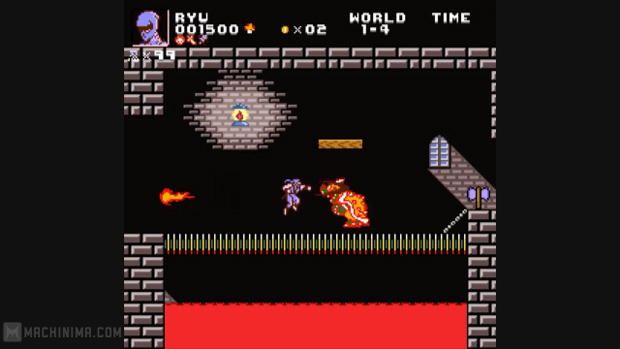 A couple years ago, Jay “Exploding Rabbit” Pavlina had the idea to remake Super Mario Bros. with 100% accuracy down to the last pixel… with the added twist of being able to play as other NES stars such as Mega Man, Link, Samus, and Bill Rizer. Super Mario Bros. Crossover totally blew up, so Jay kept stoking the fires by adding new characters like Ryu Hayabusa from Ninja Gaiden and Sophia from Blaster Master.

Within the next few months, the Version 2.0 update will go live, bringing more changes than ever before. In addition to even more new characters like Luigi and Bass, there will be new sprites, tilesets, and music that mimic SNES and Game Boy styles. The levels themselves will still be the same Super Mario Bros. stages we know and love, but if you want the game to look like, say, Super Mario Land 2, you can.

Oh, and the hero from Demon Returns in Game Center CX 2 makes an appearance as well. That’s a pretty cool surprise, I’d say! Keep an eye on the game’s page for whenever those changes go live.