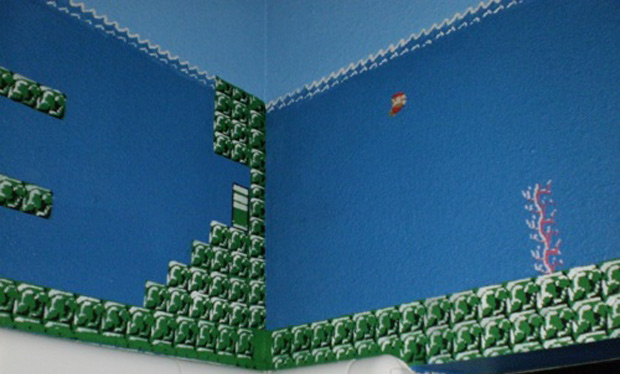 [Check out what community member eisley did in the bathroom! Poop jokes are funny! Want to see your own writing on the front page? Write something awesome and put it in the C Blogs. — Kauza]

I’ve spent the past few days straining and sweating in the bathroom. No, not like that, let me explain.

At some point the idea to turn our guest bathroom into a Super Mario wonderland was formulated and it stuck. It took forever to start and we chose the inopportune time of late April to start, just as classwork was piling up. We finally finished the first part this past weekend, very late Sunday night after three consecutive days of work. This is just the first part, though, we’re starting the next level, in the second room of this bathroom, next weekend. And after that we have plans for shelves, custom light switches, fixing up a themed shower curtain, certain Marionoises somehow happening, Club Nintendo towels, and so on. The ideas never really seem to stop flowing. And yet, as we were finishing this first level yesterday my boyfriend mentioned doing yet another themed room.

Ahem. As for now, here’s our (mostly) finished rendition of level 2-2 from the original Super Mario Bros.. After spending three days in a row standing and looking up I’m going to take these next few days to sit.