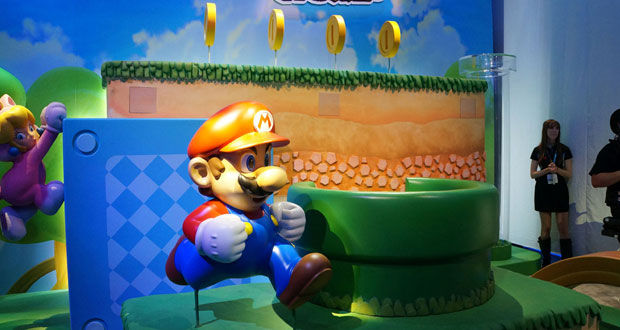 There’s the possibility of orchestrated music as well

I had a blast with Super Mario 3D World at the Wii U software showcase this morning. It was easy to fall in love with the game’s art style, the return of one of my favorites enemies from Super Mario World, Charger Chuck, and the new cat suit which adds a whole new dynamic to the game.

We were fortunate to get a question in with the game’s directors (via the super official Chad Concelmo!), and of course, I was interested in the game’s audio. They were able to confirm the return of series composer Koji Kondo and recent-addition Mahito Yokota (Super Mario Galaxy) for the game’s soundtrack. When asked about the possibility of live orchestral recordings (which were featured in Galaxy), we got some whispering, a wink, and a coy, “Wait for more information about that soon.”

I’ve been waiting for the next 3D Mario experience, and although it was hectic and crazy fun with four players all going at once, I can’t wait to play through it at a more leisurely pace on my own as well.

What do you think of the Super Mario 3D World reveal? Will you at least be looking forward to an amazing soundtrack by Kondo and Yokota?