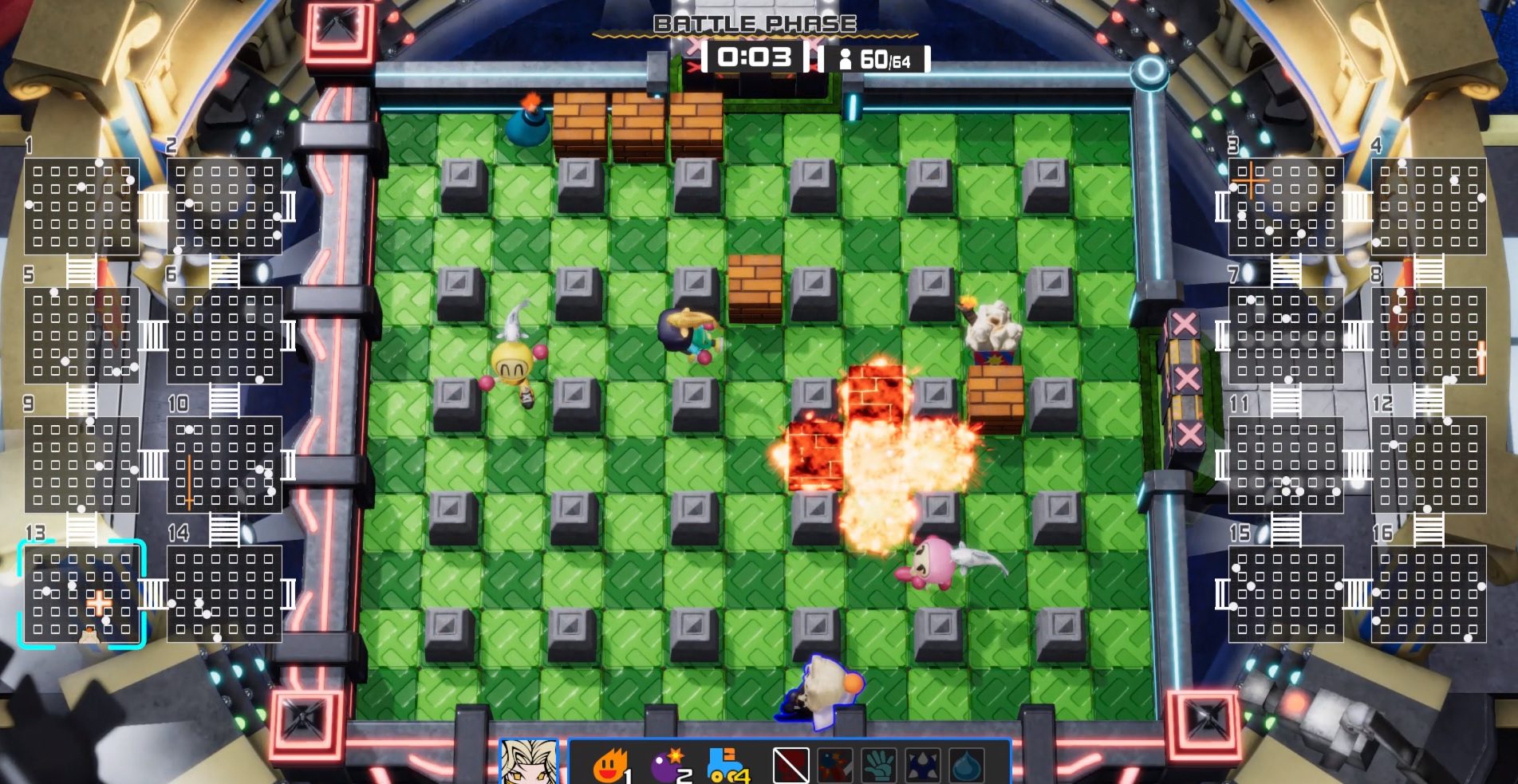 We live in wild, wild times when even Tetris and Bomberman are joining in on the battle royale craze.

While Konami naturally doesn’t enter the arena as gracefully as Arika did with the former, Super Bomberman R Online is a weird, crazy game that I’m going to enjoy diving into occasionally.

So what is this thing with the “Online” moniker tacked-on? Well, it’s kind of like Super Bomberman R, the polarizing series revival released in 2017 on Switch and 2018 on PC, PS4 and Xbox One, but quite literally an online-centric battle royale take on it. It also has elements of a hero shooter and a live service battle pass-like approach. I told you, it’s weird.

Players still have the ability to plant bombs and blow stuff up, but now the map is actually a series of interconnected giant maps with 64 people spanning the whole labyrinth. After a timer pops, you have the opportunity to shift around to another grid (called the “movement phase”) and either try and hide or take on other players: while the game corrals you out of “unsafe” zones, similar to the purple ring in Fortnite.

That’s basically the game. You start off in a traditional Bomberman arena, then periodically you can trek around a world map until there’s one person left. It’s a ton of fun, actually! Not only do you need to keep track of the map you’re on at any given time to survive, but you also need to scope out the best players in a bid to avoid them and take everyone else out first. Now here’s where the game starts to get weird: characters have special abilities, just like Overwatch or another hero shooter.

Konami Character Factory cameos return, like Castlevania‘s Alucard, who can trigger a mist power to go through bombs or blasts, or Simon Belmont, who can whip bombs or players to him, or Naked Snake, who can stealth for a period of time. All of these powers aren’t necessarily balanced, and are governed by a cooldown timer. Characters also sport different stats and “types,” with a focus on bomb strength, speed or several other factors.

The battle pass is the other bizarre part of the design-by-committee aspect of the game. After playing matches you’ll unlock new gear, like the picnic outfit above: an early pass reward. Other cosmetics include emotes, background music (a Silent Hill track is the first one to pop), player icons and hats. Like most battle passes, it can be ignored. But it’s there and the intention is to have you grind for rewards that mostly just aren’t worth it.

Super Bomberman R Online is out today as a “first on Stadia” release. The game is free with Stadia Pro, as is the Premium Pack until November 30, which grants you 14 characters and the ability to create private matches. After that, the premium pack will run you $10. I have a feeling the reception for it is going to be all over the place. I just hope it survives long enough for me to pop in and blow off some steam every once in a while, because 64-person queues could get fairly lengthy if it doesn’t.

[These impressions are based on a retail version of the game provided by the publisher. 7.5/10]