Sully: A Very Serious RPG was almost hidden on the PAX East show floor. It was in the same booth as Dragon Fantasy Book II and was easy to overlook if given just a quick glance. I’m glad that I gave it more than that, because Sully quickly became one of my favorite games on the show floor.

This game doesn’t have a super gripping plotline that has a teenage amnesiac waking up to find that he and his band of buddies must use their unique abilities to save the world from an ominous evil. In fact, the first quest I actually managed to complete was to help solve a West Side Story-esque rivalry between the crabs and the jellyfish.

Yeah, it’s that kind of JRPG. 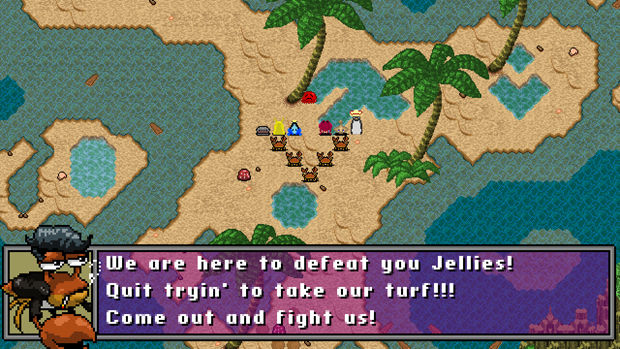 This is Raoul, and he’s pretty much a crab greaser. When I met him in the demo of Sully, he said he was missing his conch shell and that I should pick up random garbage with the hopes of finding it. I ended up picking up all the garbage and of course the conch was last, but as Raoul says, at least the park got a little cleaner in the process!

You see, the jellyfish have been encroaching on the crabs turf, and they just won’t stand for that, so Raoul needs to assemble his crew to go and confront them. With his conch shell returned he got his crew together, including a very sad and depressed octopus and a penguin in a sombrero, and went to confront the leader of the jellyfish.

This whole event seems to perfectly summarize what Sully: A Very Serious RPG is going for. Light-hearted humor with that old-school JRPG vibe.

So Raoul and his buddies end up getting defeated (aww) but leaves it up to me to avenge him. At this point, I had picked up a second party member, who I met when I was picking up the garbage on the beach. Ben McGraw, developer of the game, mentioned that no one had previously talked to her and added her to the party. No one! This was on the last day of PAX, mind you, so I found it very surprising that everyone had missed her. I also found it refreshing that it was possible to miss her and not have her in the party during that moment.

So anyway, I had to avenge Raoul and fight the jellyfish myself, which was a quick intro the battle sequences. The sprite art during battles is different than the overworld, and looks absolutely beautiful. Seriously, I just sat there for a bit watching the characters animate because I was so amazed. The battle itself played out pretty traditionally, with turn-based actions going back and forth.

Sully: A Very Serious RPG made me laugh, left my mouth agape, and left me with a clear sense of where the game is going. You can pre-order the game now from the website, and it should be out for PC sometime this year.