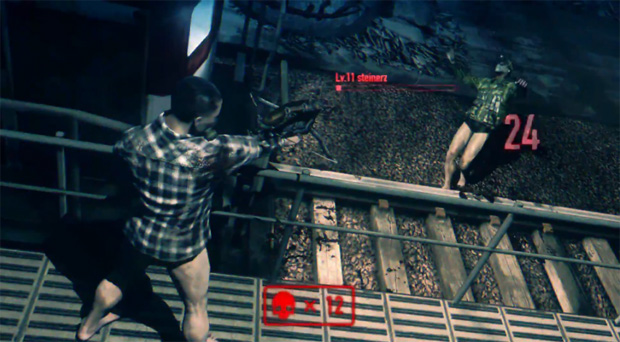 Some more details and a lot of things still unclear

Last night, Sony announced the survival-themed Let it Die from Suda51’s Grasshopper Manufacture. As has been the case with recent Grasshopper titles, Suda is serving as executive director, not main game director, though he is, “much closer to the team” this time around, he told me through a translator.

Despite this, Let it Die, which is slated for 2015, will be a huge departure for Grasshopper. First off, it’s free to play. The monetization method is still in the works. It’s also not as character- and story-focused as Grasshopper’s typical fare because of this. The “main” character of Let it Die is you, and you can spec your player as you try to kill enemies — which are other player data, rather than AI — to take their weapons and clothes.

The PS4 exclusivity came from both the technical ability to leverage player data and an existing working relationship with Sony. There could be (and should be) beta testing to provide early instances of enemy data beyond the development team. The ability to do the concept came from “the strengths of” GungHo, technically. There is also “a lot less red tape” working with GungHo, and Grasshopper is able to do the games it wants to do. “There’s a lot more creativity,” I was told.

The skateboarding Grim Reaper mascot shown off in the trailer is also confirmed to be “a really big part” of the game, but in general they were super tight lipped on how the game will actually manifest itself. We know there will be different weapon types and not only melee. There are guns, too. And the combat itself isn’t going to be combo-based, but seemingly more brutal and quick. Other than that, it was hard to get too many gameplay details for the time being.