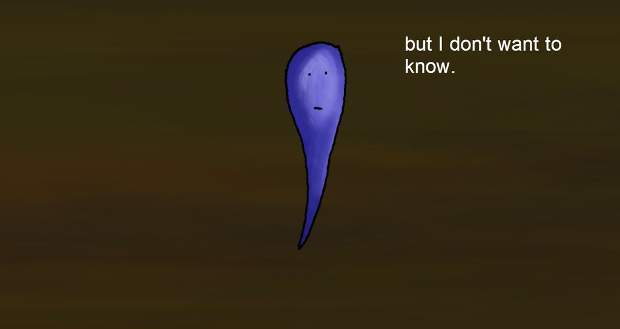 A week and a half ago on Sup Holmes (now on iTunes) we were lucky to have Will Brierly (Soda Drinker Pro, My Girl, The Golden Girls) on the program. It was an episode filled with surprises, including death scares. Real-life death scares, guys. There were a few moments there when I was sure he was a goner, though I couldn’t forgo the possibility that it was all an elaborate goof. If Will Brierly had a middle name, it would probably be “elaborate goof.”

His biggest game, Soda Drinker Pro, has been played by hundreds of thousands of people. It’s been covered in major newspapers. It contains 99+ songs all composed by Will himself. Countless hours of work and promotion has gone into this game about… walking around and drinking soda.

Is it all a parody of the millions of dollars spent on marketing so many meaningless junk food games under auspice of convincing consumers that they are “important” and “epic”? And why does Soda Drinker Pro contain a secret, brilliant, standalone game called Vivian Clark about taking on the consciousness of any object you interact with? Why did Will hide this amazing, potentially crowd-pleasing game inside of another game that seems designed to confuse and misdirect?

I asked Will about all these things. We also talked about his experiences at real-life soda-lovers conventions, his arcade game Get Outta My Face, where he finds the time and energy to create so many games that are so likely to make him rich and famous, his signature “left-handed drawing” art style, and so much more. Thanks again to Will for hanging out with us, and tune in this Sunday when we welcome Jane Jensen (King’s Quest, Gabriel Knight, Moebius)