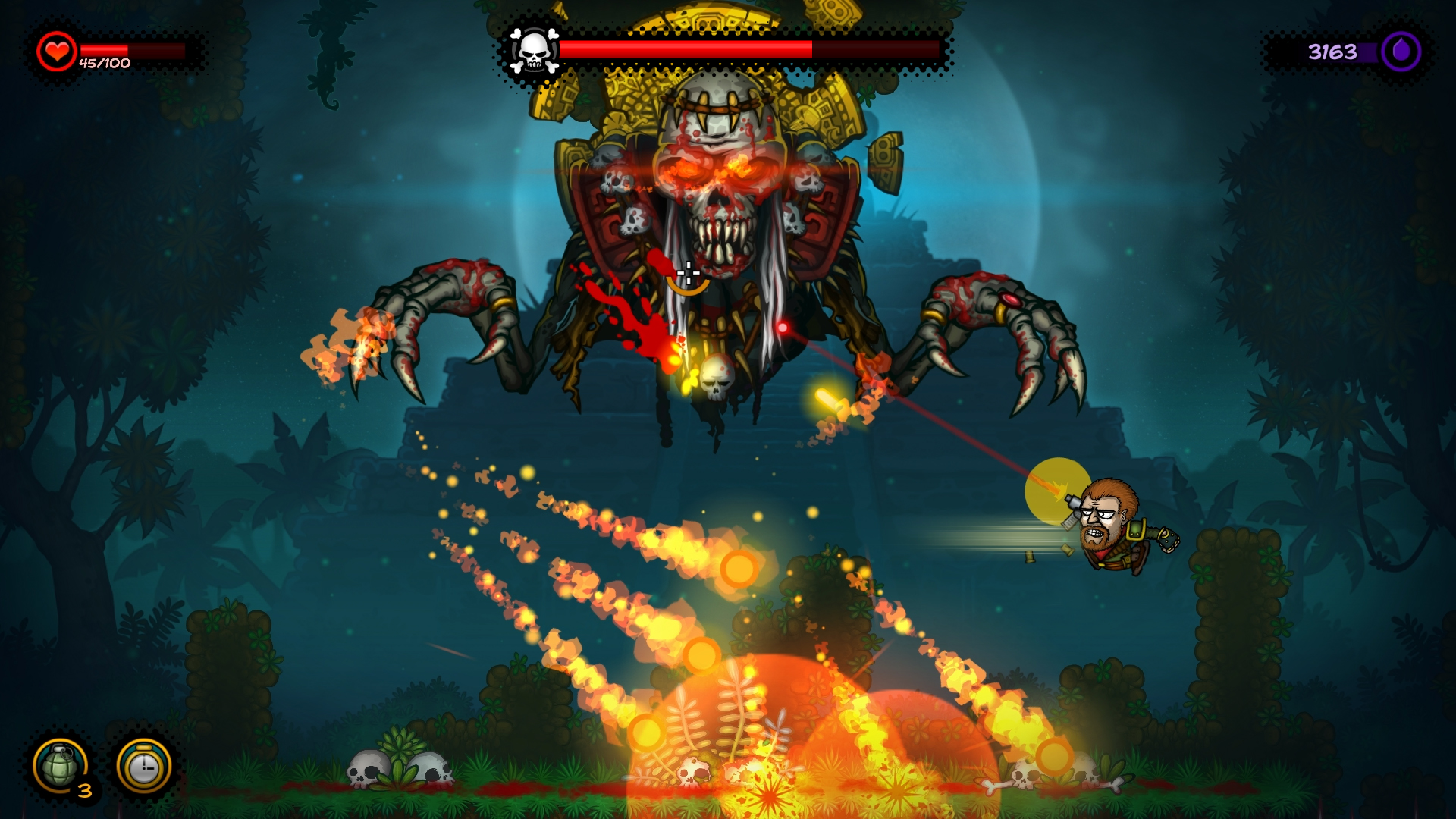 Keep an eye on this one

I was well-aware that nuance wouldn’t be this game’s strong suit when I booked an appointment with Awesome Game Studio to see Badass Hero. It takes a certain kind of wildly confident team to settle on names that are so incredibly blunt. Points for bravado, I guess. Points for accuracy too, because, as much as we’ve seen, Badass Hero features a badass hero and it definitely seems like it could be an awesome game.

Badass Hero deals in a sort of brash fantasy that’s found on the pages of a comic book. The titular badass works his way across three issues, each screen serving as a single frame in the book. There’s all sorts of mystic powers at play, but our protagonist seems as if he’s content to use good old-fashioned guns and explosives to brute his way through most of the game’s perils.

Most of our demo was spent in a jungle level fighting skeletons but that’s only part of the overarching theme. Apparently, the broader concept is that there are Neo-Nazis with nefarious plans that we’re trying to take down. Talking with founder Marcin Draszczuk, the founder of the Polish studio, he said “Yeah, we don’t really like Nazis. More than most.”

As Draszczuk gave me the basics of Badass Hero, Zack sat down next to me and beat two bosses before I finished the tutorial. What a dang wunderkind. Maybe it was just that mouse and keyboard advantage. Sure, let’s call it that.

Zack: I just figure that when you’re paid to write about video games, you should probably be at least decent at them. Next time, Brett’s not allowed into Poland, where almost every developer expects you to be fluent in the beautiful language that is mouse and keyboard. Anyway, that’s enough Brett-slagging (for now).

My immediate reaction when playing Badass Hero was that it was Rogue Legacy through an Instagram comic filter, made by developers who visited addictinggames.com a lot back in the early 2000s. I don’t mean this as an insult, but more that it initially seemed to have the simplicity of a flash-based shooter with those same, crunchy sound effects that take me back to being a young teen discovering the Internet. There’s a depth to the meta game here that you wouldn’t see in those types of games.

Collecting the ink of your comic-drawn enemies allows you to upgrade your character permanently between runs, since the equipment (armor and weapons) that you gather through each attempt is lost upon death. Reload speed, increased combat time, and more health are all bonuses that you can choose. I picked the bullet time ability that made dashing past bullets and shotgunning Piranha Plant-esque enemies in the face a breeze. In another run, I chose to use a freezing power that allowed me to shatter whatever tried to face me.

While the platforming was entertaining on its own, I was surprised at the focus on chaining enemy kills and found that it further incentivized mastery of all the systems present. A stomp move annihilates most enemies instantly and increases your combo, so I started adding that into my growing repertoire of skills. Soon I was airdashing through spikes and saws, using rockets and grenades to take out far away spider monsters, and stomping on monsters like stupid little Goombas. Some weapons felt a bit too powerful, but balancing will be done later.

In a cool touch, equipment changes the look of your already customizable character. Since you’re grabbing items from a sort of comic book multiverse, I found what looked like a Tuscan Raider mask, a Barbarian Chestplate, and a Mad Max-ish shoulderpad that ignited enemies on contact when ever I used the dash move. Yeah, I’m going to have a lot of fun with this one.

Brett: I think I’ll have a lot of fun with it too. Draszczuk wasn’t shy about naming Rogue Legacy and Spelunky as two obvious influences. The post-death permanent upgrades a la Rogue Legacy will, theoretically, make every subsequent run easier. The Spelunky parallel comes from the tough-as-nails roguelike nature.

I’m fully aware that I’m nowhere near as good at these games as I’d like to think. Some people can beat Rogue Legacy with something like 15 ancestors, whereas I closer to 500. Some folks have no problem consistently running Hell in Spelunky; I’m lucky to beat the base game if I start at the Temple shortcut. A lot of people master this type of game, and I kind of just bang my head against them until something fortunate happens. But, my immediate impression of Badass Hero is that it seems like something that’s worth banging your head against in the first place.