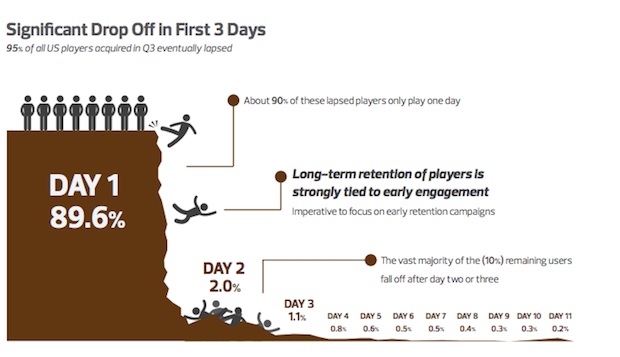 I quit after 5 minutes!

I just learned the term churn from our recent article on social game makers and how they track players. The term came up again today in a Gamasutra article on a new report from social game analysis firm Playnomics. This firm found that, during their study period this summer, 85 percent of all new players quit social games after only one day of play.

Sounds about right to me!

The study also found that 95 percent of players that started at the beginning of the quarter were out forever by the end of that quarter. Those left were the most likely to stick around for a bit longer. Non-churners (those that don’t quit) were found to play about twice as long on that first day.

On average, players churn after about four days.

The full results of the study are a fun read. There’s some weird factoids in there, like that Oregon has the most social game players in the country. An engagement map shows that some states in the southeast do not give a crap about social games.