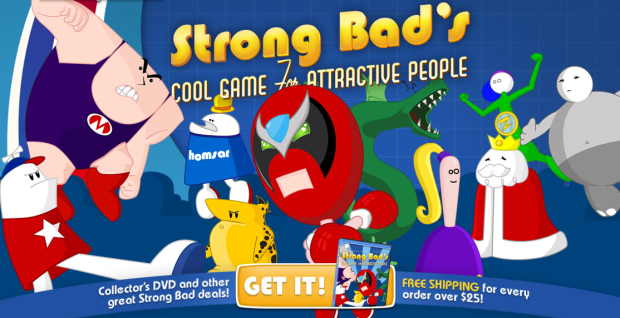 If for some reason you hate episodic content and despise downloading multiple parts of games we have good news for you. Telltale is collecting all five chapters of Strong Bad’s Cool Game for Attractive People into a special collector’s edition. I personally think one should play through them on the Wii, but I suppose the PC version would have all the same merits.

The DVD will not just include the games but a host of new special features including a behind the scenes look at how Strong Bad worked hand-in-hand with Telltale to produce the games. Also included is a MP3 soundtrack sampler and desktop wallpapers along with a few more video features. Telltale will even throw in free shipping if you spend over $25 at their site, where you can pre-order the collection now.

However, shipping will be a small price to pay if you’ve already downloaded all five games, because if that is the case then you can get the DVD for free (plus shipping)! If that isn’t enough awesome from a game company for you then how about the fact that even if you’ve only downloaded one of the chapters you can still get the DVD for only $19.95. Plus, at a full retail price of $34.95 the game is a good bargain even if you haven’t played it at all. No word if the deal applies to the Wii versions of the game, but we highly doubt it.