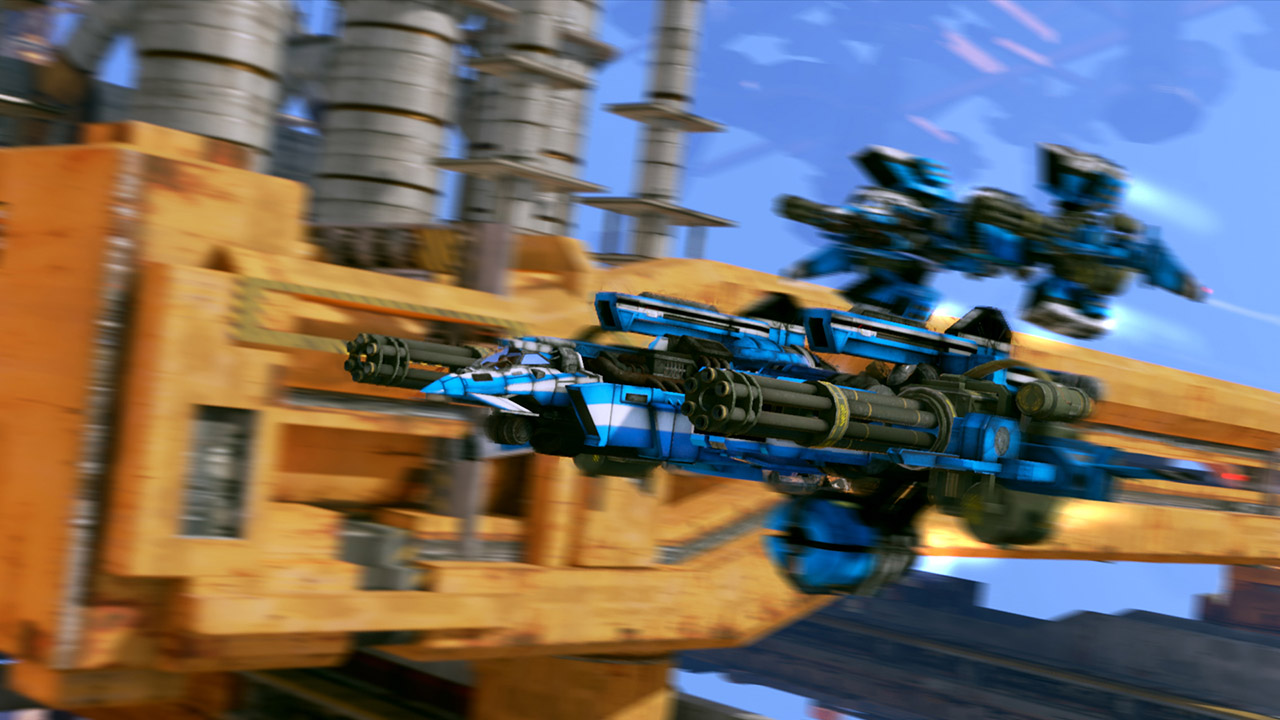 So I am flying through these big girders all like “NEEERRRRRMMM” and I just BARELY managed to grab a single repair kit before the asshole behind me pumped my rear engines full of missiles. I transform my Vector and flip around and fire off my cannon and “BOOM,” fucking blow him to pieces and just barely win the match.

This is a typical description of my time spent with Strike Vector EX, a game all about piloting a boxy looking metal rig around an arena across several multiplayer modes and multiple maps full of health power-ups and blowing up other boxy looking metal rigs in an environment full of even larger boxy looking carrier ships made entirely of girders and caution tape. And it has been a hell of a lot of fun. 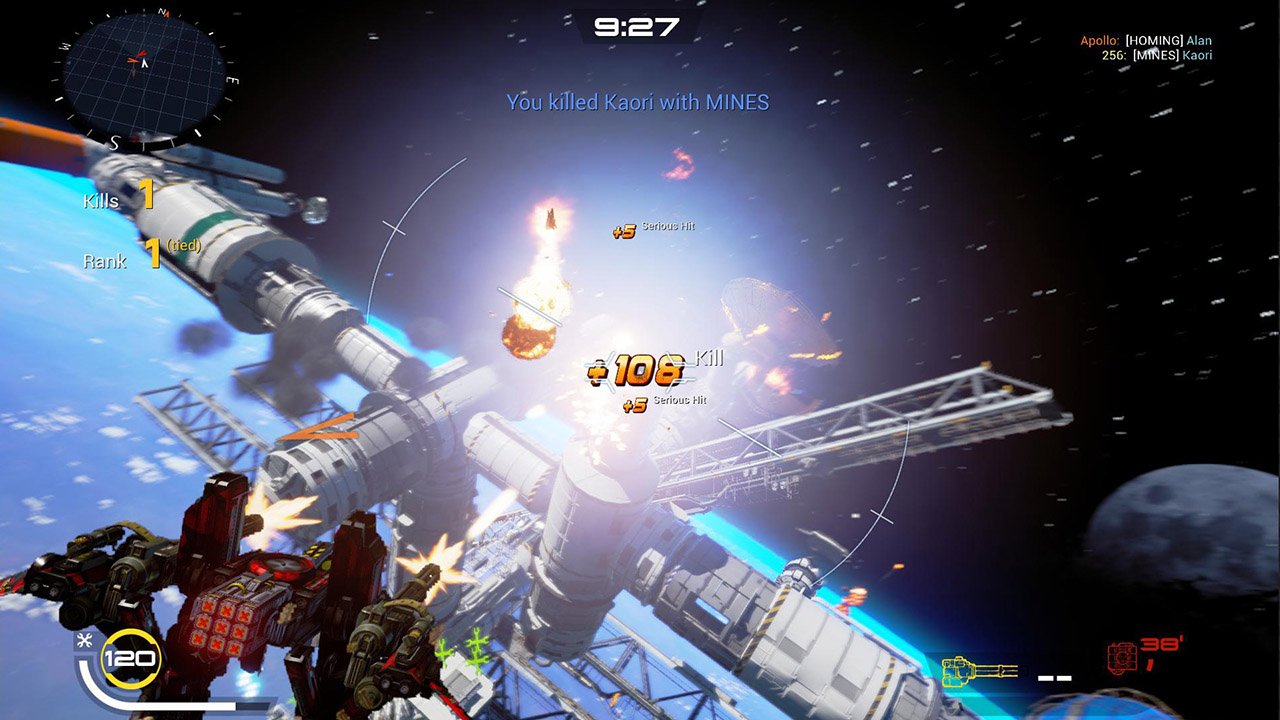 I passed on the original Strike Vector despite appreciating the visual and aesthetic style of it; aesthetically it reminds me of a Sega Genesis game, the Herzog Zweis and Thunderforce titles of the day, with simple online arena play that would have been right at home on the Sega Dreamcast, cheesy-as-hell metal soundtrack included. Strike Vector was eventually improved and ported to consoles as Strike Vector EX, adding a single-player campaign and bots in multiplayer, along with some UI upgrades, other minor improvements, and now it is back on Steam again in what one can only suppose is the final version of a game that is effectively three years old now. We reviewed the console version pretty well and I don’t have much to say differently; it’s a fun game that relies entirely on its multiplayer to bring the pain, and the single-player addition is effectively a stretched-out tutorial to teach you how not to get murdered horribly when you first jump into the action online.

I don’t want to trash the campaign too much because that obviously is not the focus here. It’s decent enough for what it is, but shoehorning arena-style gameplay into a half-assed single-player story is something I’ve never been particularly fond of. More than anything it just illuminates the simplicity of Strike Vector EX in a way that isn’t overly helpful to creating a first impression when the campaign is initially loaded up. But it’s something extra, it is good at teaching the basic mechanics, and it certainly feels like a more complete package overall even if this addition is just extra window dressing. 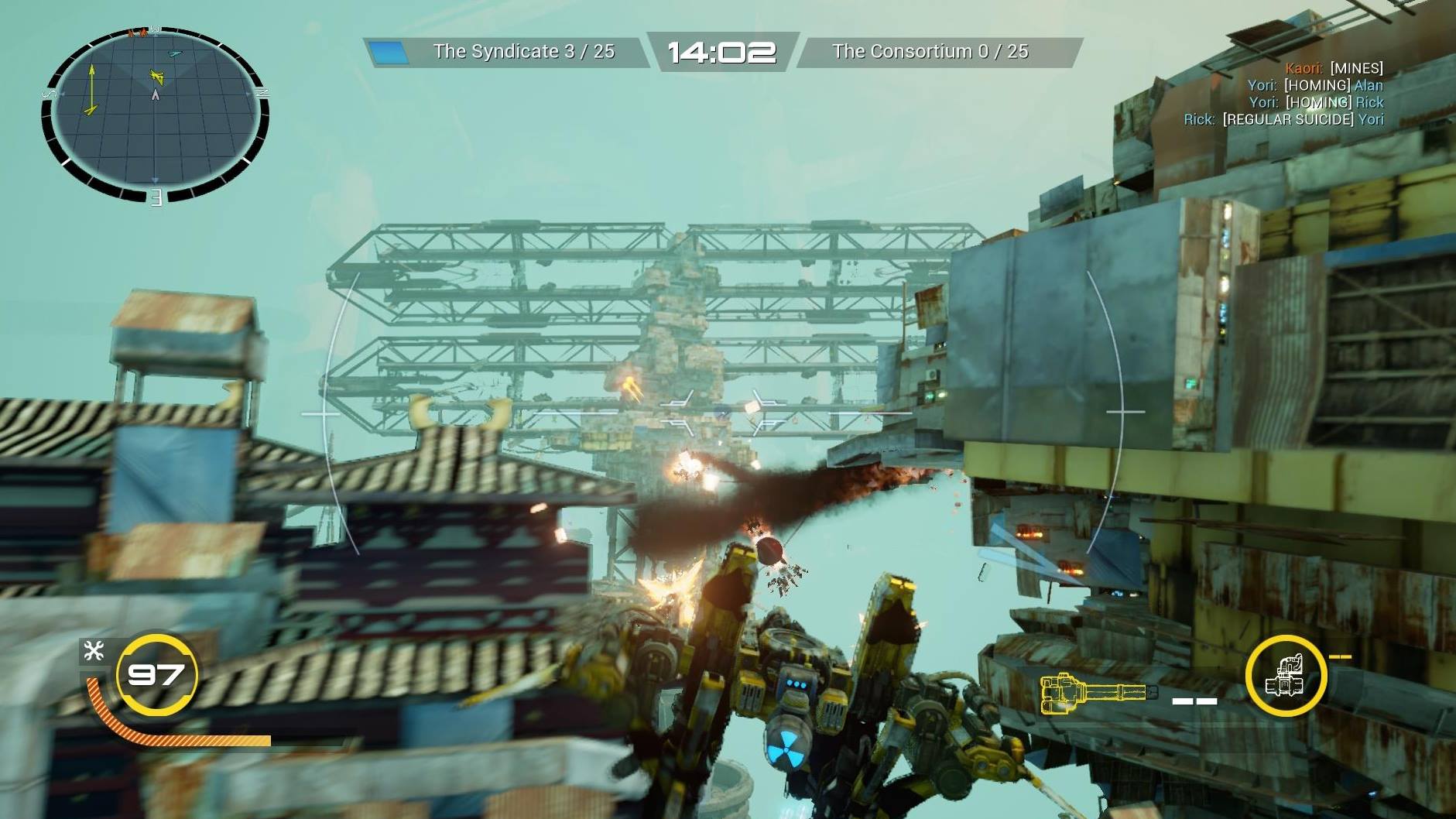 To be truthful the biggest thing hindering a lower-key title like this is the risk of a non-existent community. Ragequit Corporation has done a pretty good job at localizing it for different markets to make the player base as broad as possible, and I think there will likely be a small but consistent group of diehards who will keep the community alive. I didn’t have trouble finding matches with real people and even surviving and thriving in a few matches despite being horribly outgunned by people who clearly understand the ins and outs of the game. I had the most fun with team deathmatch even though I was initially confused and instantly killed a very patient teammate due to friendly fire being enabled by default. The game is frantic enough mechanically that it doesn’t help matters when everyone is trying to aimlessly blast one another, so I felt that grouping up in a squad helped to keep things manageable.

Strike Vector EX is a beautiful game to look at, and the thrill of racing around and firing off rockets was evocative of After Burner for me. I could see playing this in an arcade with a rotating cockpit, or in VR: even when I was getting my ass kicked I was having fun narrowly avoiding arena obstacles, picking up health kits, and experimenting with the loadout. (Homing missiles are lame.) I don’t know if I’d continue playing more than just a passing fancy; apart from the thrill of ship-to-ship combat, the ranking system and arena combat feel fairly generic when compared to the ever-increasing milieu of other deathmatch shooters out there, but it’s unique enough to be worth a quick look considering it will only set you back a few bucks.

As far as the PC version is concerned, I didn’t notice any performance issues, graphical hiccups, or notable bugs. Disclaimer: I have an old man’s rig despite working for a company building gaming rigs, so it was impressive to see everything running on the highest settings without any performance problems. I preferred playing with a controller despite having tighter accuracy with mouse and keyboard, and was impressed on how both control methods seem valid enough to be useful at least in low-level play. I have read complaints that EX is a bit dumbed down compared to the original in terms of loadout flexibility, which could also be seen as the developers simplifying and refining the game for a broader market, so I can’t see that being a deal-breaker for anyone apart from hardcore fans of the original. If you were excited for Strike Vector getting an update but weren’t interested in playing it on consoles, this is the most complete version of it yet, and a hell of a lot of fun, at least for a few solid hours.