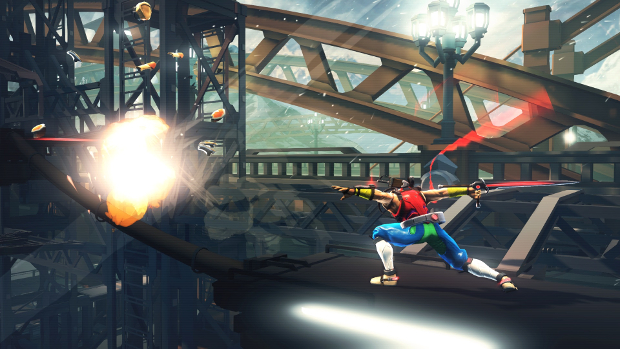 The new Strider game from Capcom and Double Helix has been looking pretty good. With every screenshot and trailer sent out, I’ve been become more and more excited with getting my hands on it. And now, it looks we’ll do just that sooner than we think. Capcom USA’s Greg Moore just revealed on the Capcom-Unity blog that Strider will be released for the PS3/PS4 on February 18, and along with the PC and Xbox 360/Xbox One versions the following day. Priced at $14.99, it will be distributed on PSN, Xbox Live, and Steam.

In addition to this news, we also saw the reveal of additional content that will come with the game. Along with the Story mode, which takes Strider through an enemy facility in ‘Metroidvania’ style, we’ll also get a speed-run mode called Beacon Mode, and a Survival Mode where the ninja must battle waves of enemies without perishing.

But wait, there’s more. Strider will also come with a slew of customization options, such as color edit mode, and also twelve additional costumes to outfit the titular character with. One of which is the white costume of Strider Hien from Strider 2.

This is all a pleasant surprise, much sooner than I expected. It’s been a long time since Strider has had a game of his own, and he definitely looks as fast and fierce as ever. For more info and images of Strider swing by Capcom-Unity, and check back in the coming weeks with Destructoid for our review.