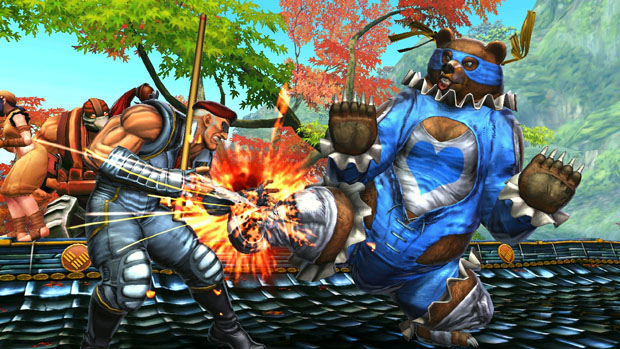 Capcom has announced their pricing plans for Street Fighter X Tekken‘s DLC, and it’s hard to say how fans are going to take it. The good news is, a lot of the DLC will be free (including a bunch of new gems, some pre-set combos, additional palate swaps, a patch to get rid of many of the game’s infinites, and more). On the other end of the spectrum you have the new “swap costumes” which outfit the Street Fighter side of the roster like Tekken fighters, and vice versa. Swap costumes are $1 a piece, or you can deck out the whole Street Fighter (or Tekken) team in swaps for $13. My second grade math skills indicate that it’lll cost $26 minimum to get every swap costume. That’s about the same price as Tatsunoko Vs. Capcom, an entire (and arguably better) Vs. fighting game.

The 12 “new” characters (including Elena, Alisa, Guy, Cody, and many others) are a little more reasonably priced. You can grab them all for $20. That’s more content-per-buck than the 4 characters and handful of modes that made up the Super Street Fighter IV: Arcade Edition DLC (which cost $14.99). Still, the fact that most of this content is already on-disc is sure to sour the deal for many of you. No word on if Pac-Man and Mega Man (two other characters already found locked away on the 360 edition of the game) will ever be officially released on that console. They may remain PS3/PS Vita exclusives, at least “officially”.

Speaking of the PS Vita, it sounds like all 12 of those DLC characters will be unlocked on the PS Vita version from the start for no additional cost. Including the 5 PS3/PS Vita exclusive characters, that gives  SFxT on the Vita 17 more characters than the pre-DLC version of the “same” game on the 360.

Does that have you leaning towards picking up the game on the Vita? If not, do you plan on getting all $46 dollars worth of SFxT DLC on consoles, or would you rather save that money to buy another game or two? Do you think Capcom should have made all this content free, or do you think people will gladly lay down their dough to get a whiff of these sweet, on-disc DLC cookies?