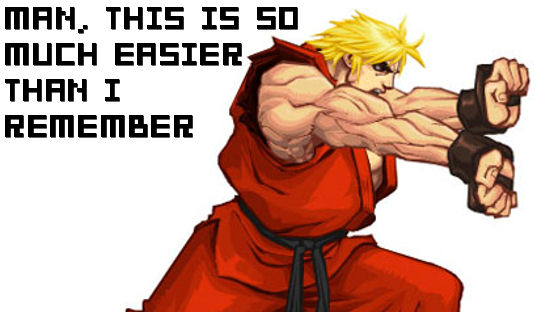 Considering I can’t play one-on-one fighting games to save my life, it’s somewhat self-defeating to call people who can’t throw a Dragon Punch “stupid,” since I’m clearly one of those people. My woeful lack of skill in all things Street Fighter, however, may be getting a shot in the arm thanks to Capcom’s announcement that it is simplifying the controls for Super Street Fighter 2 Turbo HD Remix (though sadly, not simplifying that awful name).

“There’s only so far I can go with this and still call it SF2, but wherever I could, I turned the knob towards easy execution of moves,” said David Sirlin, who is overseeing development for the upcoming XBLA/PSN title.  “Let’s emphasize good decision making – the true core of competitive games—and get rid of artificially difficult commands… This will get more players interested in the game, eventually leading to more competition. It will also get players past the awkward beginner phase faster and into the intermediate phase where the interesting strategy starts to emerge.”

Sirlin has a few good points — making it easier to input a convoluted command won’t take away from the fact that you still need to use strategy to use the moves at the right time and in the right way, it just makes the whole system more intuitive. I personally am very turned off by needlessly long button sequences that seem to be the backbone of the genre, so I must confess this has made me — far from a fan of 2D fighters — somewhat interested now.

That said, I don’t expect the hardcore SF demographic to see it that way. I can almost hear the cries of “dumbing down” and “burn the casual gamers” as I type. What do you guys think? Will this be Street Fighter for dummies, or will the game simply be more fun to play for more people?