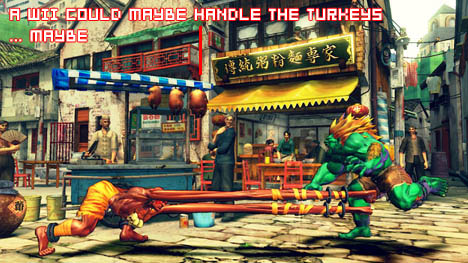 Ever since I got my hands on Street Fighter IV, I’ve been longing to have a copy here in my home. And thanks to the announcement of the upcoming Xbox 360, PS3, and PC versions, my dream will one day be a reality. But what about the Wii owners? Don’t give up hope yet, waggle warriors!

“The more people that ask about it, the more likely we are to move in that direction,” said producer Yoshinori Ono in an interview with Siliconera. “The very existence of Street Fighter IV was based on people asking about it for so long. If we get a lot of requests, it will be something we will think about. It might be difficult to reproduce the graphics exactly as they are, but the gameplay should be completely intact. It’s something we can think about.”

Street Fighter IV is a great looking game, but the last few times I’ve played it, I was too busy trying to stay alive to admire the flashy graphics. If you ask me, I think it could work on the Wii, provided that they leave out the waggle. A Classic Controller would work fine, thank you.

Ars Technica’s Ben makes a good point: “Just because something can be done doesn’t mean it should be done, and I would hate to see what SFIV looks and plays like after being hacked down for the Wii.”

There’s no doubt it would be ugly, but looks aren’t everything, right?