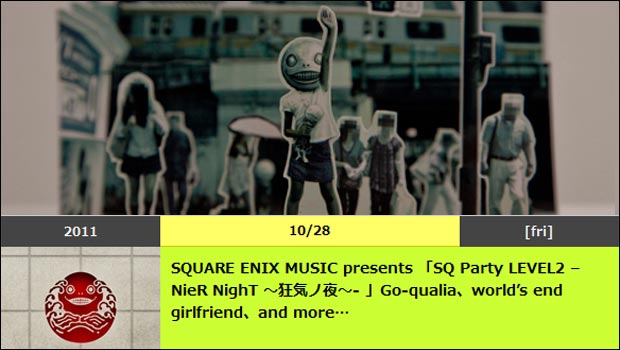 Maybe you had trouble waking up at 4:00 AM to catch Square Enix’s streaming SQ Party LEVEL1 concert that took place last week.  I managed to tune in along with 3,000 others to hear remixes from across Square Enix’s classic game franchises, and even though I was tired for the rest of the day, I think it was worth catching the performance.  The event was apparently popular enough to warrant a follow-up, and Square Enix has announced SQ Party LEVEL2 -NieR NighT- for Friday, October 28, returning to the Studio 2.5D venue.

I know a lot of people picked up the recent NieR Tribute Album -echo-, and it looks as though two of the artists involved with the album are confirmed to be at this event.  Go-qualia, world’s end girlfriend, and ‘more’ will be taking to the stage to presumably perform their arrangements from the album.  As with last time, the event will be streamed live on the venue’s Ustream channel, and note that this concert is getting a new day and time, taking place on a Friday (10/28) at 20:30.  That’s 4:30 AM PST and 7:30 AM EST.

Did you tune into the LEVEL1 concert last week, or does the NieR-flavored LEVEL2 sound like it’s more your jam?