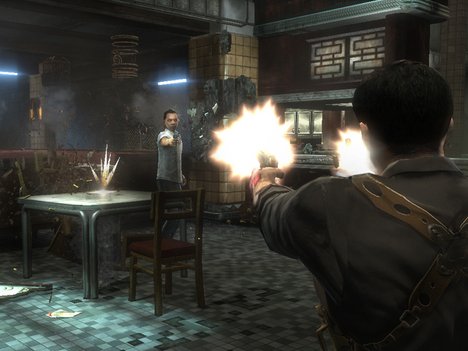 Exciting news for fans of dual gun wielding, room trashing, and white doves — Midway have announced that they will be releasing a demo for Stranglehold on Xbox Live and the PC early August.

In case you don’t have a calendar in front of you, August starts next Wednesday. That is the day when everyone can start whining, “Where’s the Strangehold demo? Midway said they were releasing a Stranlehold demo!”

The PC and Xbox 360 versions of the full game will be shipping on August 27. There’s bad news for PlayStation 3 owners, though — they’ll have to wait until September 17. For anyone who owns both a PS3 and Xbox 360, and really wants to pick up Stranglehold, this is disappointing news. The collector’s edition of the the PS3 game will ship with a remastered, HD version of the classic action film, Hard Boiled. The Xbox 360 collector’s edition will ship with tears and stolen dreams.