I didn’t know much about Haimrik before getting my hands on it during PAX South. Other than its eye-catching art direction, not much has been said about the title. Glancing at its sepia-toned world, I had a slight worry that I wouldn’t enjoy it thinking I’d be bored.

But then I saw the titular Haimrik cut his hand open and — with blood covering his face — leap into a magical book.

I’m not really sure how to classify Below the Game’s Haimrik. The adventure game has hints of a platformer mixed with puzzle elements, quick-time events, and occasional endless-runner sequences all blended together to form its own beast. Despite mixing different sorts of genre mechanics, it is entirely unique. The PAX South demo had me walking around Haimrik’s town, talking with a few of the folk, and this is where the game’s humor came to the forefront. The team pitched the title as “Game of Thrones meets Itchy and Scratchy [from The Simpsons],” and with that, it instantly caught my attention. Although there’s blood and gore galore, it’s heightened to the point of cartoonishness so the nature of the violence becomes hilarious. Coupled with the sepia tones, the blood stands out even more.

All of this comedic gore would be mindless without Haimrik‘s story, and given you literally scroll over the story as you move along the world, strong writing is going to be absolutely integral here. Unfortunately the writing in this preview demo (which ran the length of the first level through the first boss fight) was a bit too juvenile for my liking. Cartoonish violence is fun, and there’s a personality here, but it’s not my particular taste. By the end of the demo I had grown a little numb to its humor, so I’m not sure if this can last the full length of the title. 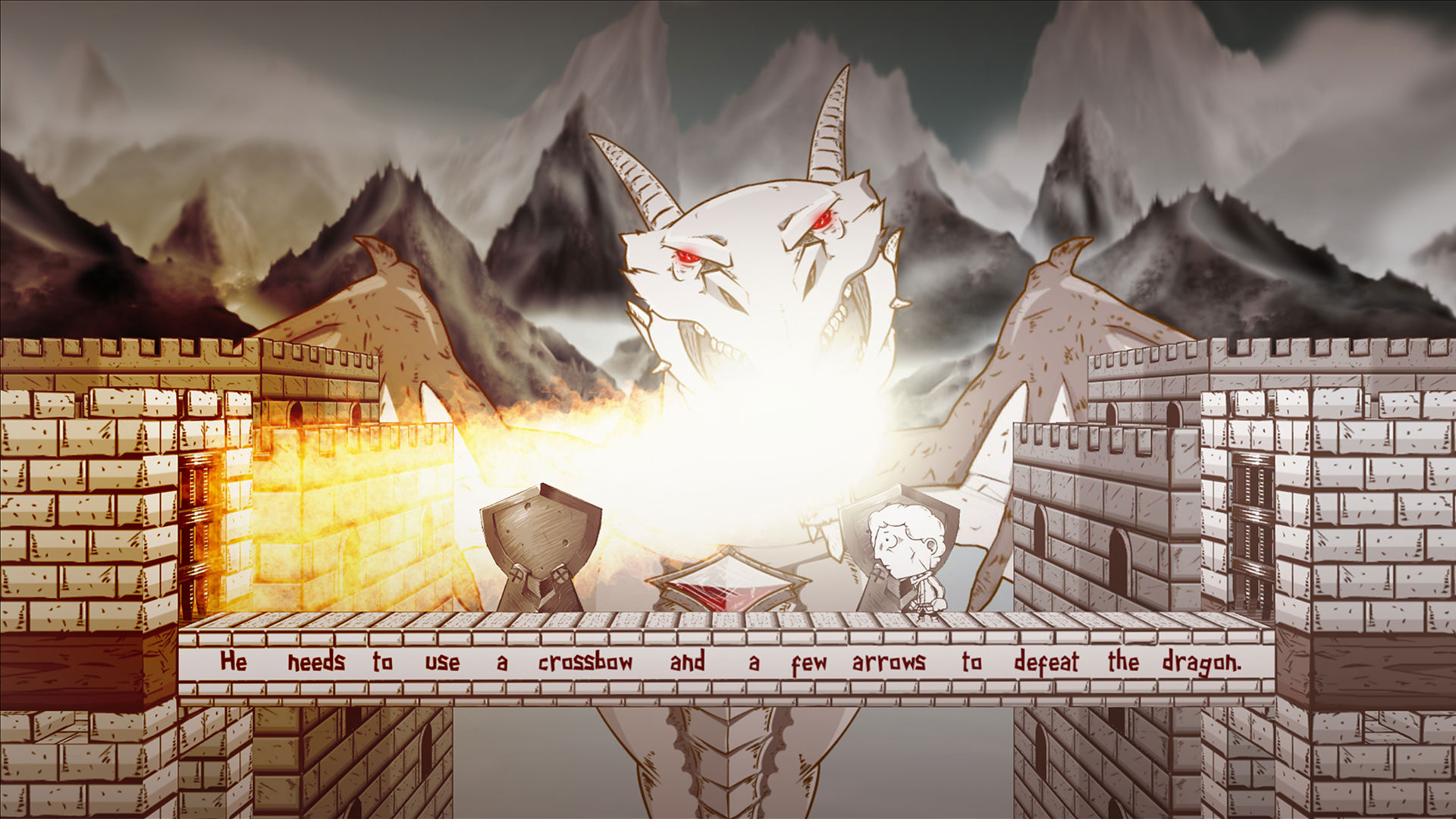 But what of the gameplay? Although movement and interactions are a bit slow (I suppose the phrase “deliberately paced” is applicable here), I can’t get over how neat Haimrik‘s interactive words are. As Haimrik walks over words, he can interact with a few of them to get to the next part of the level. For instance, at one point I fought a few soldiers. I picked up a sword from the word “sword” and started fighting them, but there was also an option to pick up the words “barrel,” “gunpowder,” and “torch” and craft a little makeshift bomb to make the fight easier. Right after that, I grabbed the words “crossbow” and “arrows” to fight a dragon from an over-the-shoulder third-person perspective. The transition between gameplay styles is pretty seamless, with my only issue being how off the aiming was if I wasn’t standing in an exactly specific angle to shoot my arrows.

After some more exploring, and solving a few more puzzles in this fashion, I got to the boss battle. Each boss in Haimrik is a “Word Warrior” who shares the same power Haimrik does. As you’re interacting with words to deal with the boss, they have their own set of scrolling words to fight you back. There were two stages of this boss battle. The first had me activating the word “lightning” as the boss used a metal sword, and the second was an endless runner as I dodged beams while shooting down chandeliers with flaming arrows. What’s especially interesting here, given combat is so slow, is figuring out what works and what doesn’t. The game will give you some hints if you’re taking your time, but it’s not really necessary. The unfortunate thing about both boss battle phases, however, is that they went a little long. 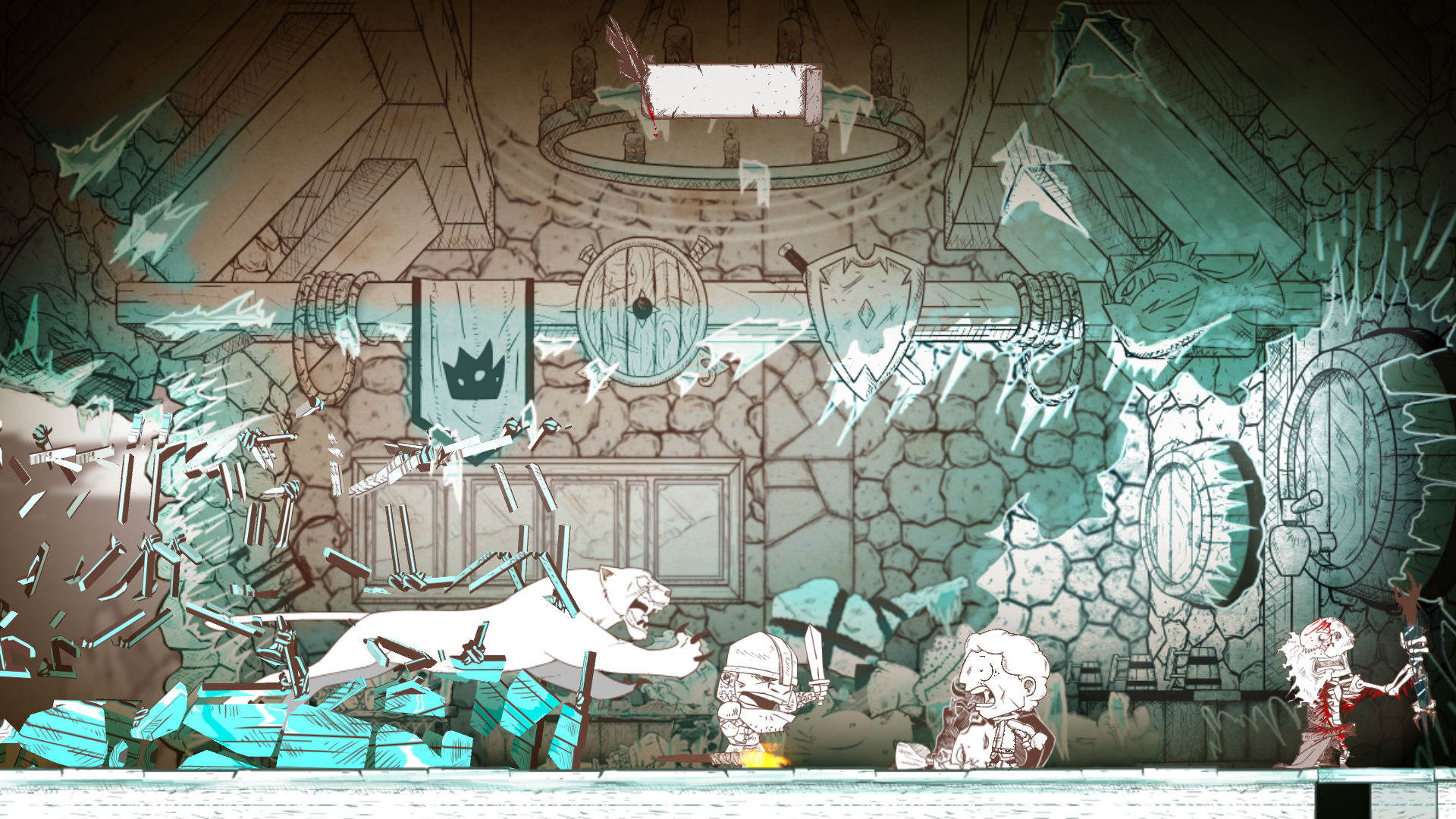 Coinciding with the worry Haimrik‘s cartoonish gore and humor would outlast its welcome is the ever-nudging concern the gameplay might be moving a bit too slowly for its own good. The puzzle aspects are neat (as the game presents different options), but the boss battle restricted how I could play. On top of limiting how I dealt with the boss, it took one or two more completed patterns (e.g., striking the boss with lighting or causing a chandelier to fall) than felt necessary. Rather than adding to enjoyment or tension, it felt like padding.

Nevertheless, Haimrik has a really cool idea at its core. If you’re into brutal cartoons, then you’d probably dig its personality. Haimrik releases on Steam, PlayStation 4, and Xbox One later this year.