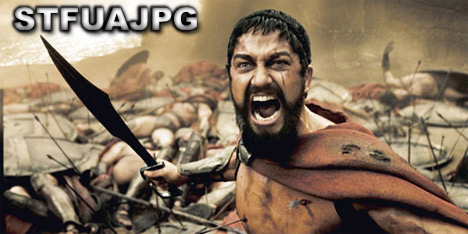 KICKASS! A year ago we were stoked to get a single comment on Destructoid, and last week’s STFUAJPG contest soared to over 200 comments. What an honor! Here were the three winners, with their winning pictures in the gallery below.

Email me and I’ll send you whatever new video game you want. Thanks to all who entered! Every few months I’ll run another STFUAJPG contest and give out some more games to help reward all you awesome readers, we’re truly in debt to you all, you have no idea how much we love you gamer guys and gamer girls.

Right now I’m off in Miami partying with people I never knew a year ago, and many of which, I’ve still never met in real life until now. How awesome is that? Spartans were pretty badass, but Destructoid robots are the best! “THIS. IS. DTOID!” Niero truly has assembled an army of gamers, and I’ve never been more proud in my life to be part of something.

A year ago I was an Internet junkie, but surfed the net without a cause. Then I found Destructoid, and since day one back in 2006 I’ve been hooked. I was the first editor that Niero hired back in April (he hired me on April Fool’s Day — what an asshole!), and it’s altered the path of my entire future. I’ll never be able to thank you enough Niero. I can’t imagine, and don’t want to imagine, my life without Destructoid in it every day. You’ve given us all more than we can ever give in return, and it’s an honor to blog with you, and to discuss and debate games with the best gamers on the net.

We’ve come a really long way from having a few dozen daily readers — you should have seen our emails to each other a year ago when we’d be excited beyond belief for getting just ten comments in a single day. Destructoid is all about giving gamers a voice in the industry, and it’s one large booming triumphant victory cheer that we all shout today in unison. We’re all just a bunch of people who genuinely love playing and talking about video games, and we owe it all to you readers who have made it possible for our robot army to come this far in just one year. It’s hard to set goals for 2008 when we’ve already done so much, but you have our word that we won’t ever stop. Long live Destructoid. Forever and ever.