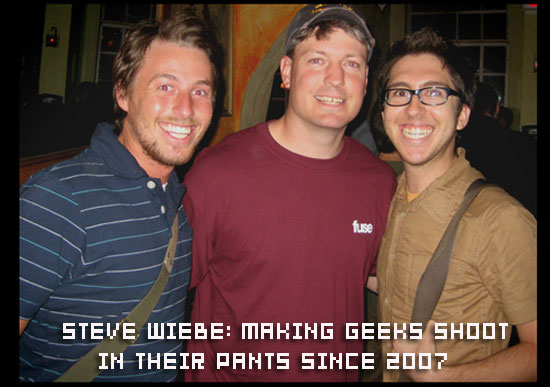 Steve Wiebe emerged from last summer’s docu-flick The King of Kong: A Fistful of Quarters looking like the quintessential geek hero after defeating bizarro-prince Billy Mitchell for his high score at Donkey Kong. Since then Mitchell has stepped up to the plate and reclaimed his place at number one, although Mitchell’s honesty about the scores past and present has been subject to a great deal of speculation, especially since the documentary portrayed him as a shifty character.

Mitchell and Wiebe went head-to-head in a match last week set up in Las Vegas by arcade scorekeeping kings Twin Galaxies, but Wiebe couldn’t defeat the prince of darkness. The actual high scores are maddeningly close — Mitchell’s is 1,050,200 and Wiebe’s 1,049,100 — but knowing Wiebe’s calm demeanor, it seems likely he’s a “if at first you don’t succeed, try try again” kind of dude. I sure hope so, because as much as I know that King of Kong purposely set up a good vs evil dynamic in their portrayal of the two competitors for dramatic effect, I just don’t like Billy Mitchell anyway. Who in their right mind can like a guy that wears American flag ties?