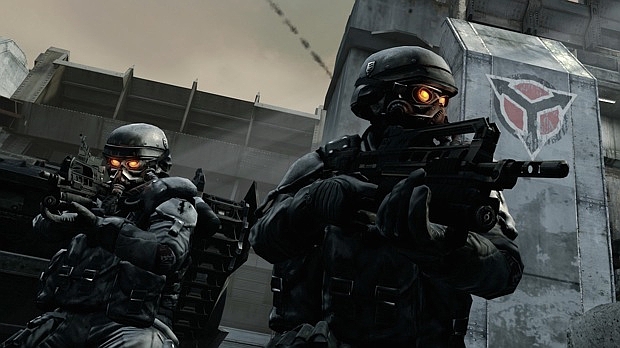 Whoa. There’s absolutely no way to overstate the significance of the Killzone 2 downloadable content announcement on the latest episode of GameTrailer’s TV. Last night Herman Hulst, Guerilla Games’ marketing manager, blew minds with the announcement of “Steel and Titanium,” a two-map pack with its source material already included in the single player campaign of the game.

According to Hulst, the first map — the “Steel” — is set on the ISA tech cruiser, the “New Sun.” The multiple floor structure will provide “a very new game flow” because of the amount of vertical shooting antics between the map’s walkways.

The other map — the “Titanium” — is set on two Helghast freight trains. Players will start on the beginning of the train and work their way to the next. Jumping between the trains can happen, but of course, will come with its own dangers — there’s a pit between the trains.

“Steel and Titanium” will be released “towards the end of April.” If you’re already looking ahead (and why would you?) Hulst teased the next batch of DLC for the game:

“I can probably disclose to you that one of the words in the second pack we’ll release — and I won’t say anything else on it — will be ‘retro,’ Hulst said. “So maybe you guys back at home can sort of speculate on what we’ll bring out on it.”

So, fighting on trains and a tech cruiser? I’m in as long as there are opportunities to get a turret kill. What do you guys think about this announcement? Are you surprised? Did you want more?