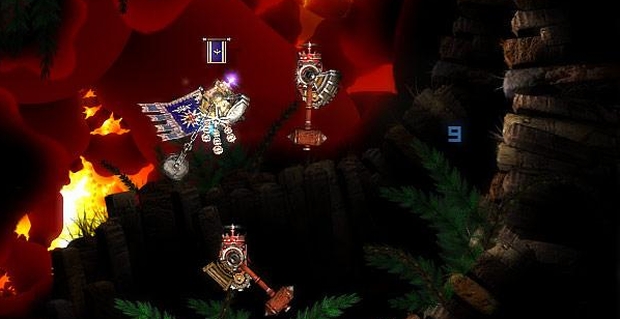 Then again, maybe “brawler” isn’t the right word — Hammerfight is, to briefly summarize, a ship-versus-ship combat game where you swing boulders, hammers, swords, and other melee weapons around your steampunkified™ flying machine solely by moving the mouse. The faster you swing, the more damage your weapon does.

Hammerfight is now availble on Steam for $9.99, which would be awesome if the game weren’t so goddamned frustrating.

I was planning on reviewing Hammerfight, but I doubt I’ll be able to; the game seems to have absolutely no idea how difficult it is, and takes great pains to throw you in ludicrously unfair situations at every turn without bothering to include any sort of actual difficulty curve.

The moment you start up the game, you will be kicked in the balls. It only gets worse from there, as the game forces you to play through escort mission upon escort mission upon escort mission, while also forcing you to fight against literal armies of much stronger enemies wielding much stronger weapons who can maneuver with remarkable dexterity while your ship seems to control as if it were made of dark matter and loaded down with ball bearings. And this is on the easier of the two campaign modes.

But, I dunno, maybe the game gets better later on. The basic idea is pretty cool, at least.